The photographer merges memory, myth and social critique – with a distinct veneer of Vermeer 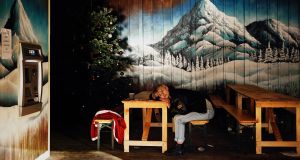 Tom Hunter is an artist best known for creating elaborately staged photographic tableaux, often related – in terms of composition, subject matter and colour – to paintings, from Vermeer to the Pre-Raphaelites, that hang in public galleries. He is closely associated with Hackney in London. Its buildings, streets, post-industrial waterways and landscapes, and its people have inspired and driven his work since he arrived there in the mid-1990s. While Hackney has been and continues to be an incredibly rich source for him, his latest body of work also takes him well beyond London and extends his engagement with painting to other strands of visual culture.

He describes Figures in a Landscape as “a personal odyssey which transports the viewer through a world imbued with myths and legends . . .” His starting point was again a painting, on the face of it an unlikely one: Thomas Couture’s Romans During the Decadence, a vast composition in which a party of debauched Romans are sprawled across a classical setting. Three years in the making, it was intended as a thinly veiled critique of what Couture saw as the French decadence of his own time. What appealed to Hunter was the way the painting has “mortals and immortals inhabiting the same domain”. The seamless coexistence of “statues, humans and ancient gods” allows us access to other dimensions “between Earth, Hades and Mount Olympus”.

His own version of such a realm extends from “the hillsides of the West Country to the marshes of Hackney”. Hunter was born and grew up in North Dorset, in the market town of Blandford, an area steeped in history and myth. He can remember stories of how, as part of May Day revels, couples wishing to conceive would set out to copulate beneath a famous fertility symbol, the naked figure of a tumescent giant, scratched in outline into the chalk at Cerne Abbas – one of several such chalk figures.

In mingling personal memories with historical monuments and sites, he constructs his own mythological domain, with Poseidon in his underwater grotto, and a visit to Crystal Palace reconfigured as a potential Journey to the Centre of the Earth. More recently, summer evening swims in Hackney pools evoke a Celtic deity that looks over London’s other river, the Lea. But Hunter’s view of Winterville, the “alternative” Christmas festival, brings him back to Couture’s decadence and the contemporary reality of “a dystopian consumerist nightmare”.

Hunter has never tied himself to one style or format, and this work offers several distinct modes of picture-making. His approach to art and life grew directly from his personal history. Because he was unfairly considered as being poor academic material when he was young, he left school and worked at several physical jobs, including building work and planting trees. He was 25 when his then-girlfriend won a place at the London School of Furniture Making, and he moved to London with her. He found himself living in a community of alternative artistic types squatting in houses on Ellingfort Road in Hackney. He worked selling finds at a street market stall (while photographing his customers), and pruning trees in Regent’s Park, but in time he enrolled to do a photography degree at the London College of Printing.

Wandering around Hackney – “trying to make sense of this urban maze” – was in many respects formative. He came to appreciate the layers of history implicit in the architecture, communities and geography of his immediate surroundings. His degree work, made with a large-format four-by-five-inch camera, was a portrait of his street, a series of transparencies set into a three-dimensional architectural model. Tutors commented on his images’ correspondence with Dutch painting of the Golden Age.

He checked that out, and was smitten by Vermeer. But he went travelling and some years passed before he found himself back in Hackney, to take up an offer of a place at the Royal College of Art. There he completed the body of work that put him on the artistic map. Persons Unknown grew out of his experiences as the council tried to prise him and his neighbours out of the buildings in which they were squatting. They received eviction notices addressed to “persons unknown” and essentially his photographs made these “unknown” people known.

The most celebrated, Woman Reading a Possession Order, is a direct reworking of Vermeer’s painting Girl Reading a Letter at an Open Window. Several other photographs in the series also drew on Vermeer. He has not derived anything so directly from Vermeer since, but, he says, “I have always tried to keep his art practice at the heart of my work.” That is, a concern for “the dignity of the ordinary people involved in their daily lives, lifting the ordinary into the extraordinary”.

Figures in a Landscape, photographs by Tom Hunter is at Green on Red Gallery, Park Lane, Spencer Dock, Dublin, until October 13th; greenonredgallery.com

Smurfit secures world record for a Gerard Dillon at Sotheby’s