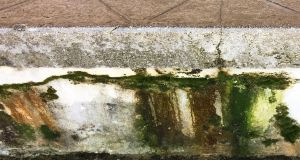 A photograph from “Announcing notte sopra, vipere sotto”, an exhibition of Irene Bindi’s work at the Golden Thread Gallery in Belfast.

What is it? A photograph by Canadian artist Irene Bindi that forms part of her project and exhibition, Announcing notte sopra, vipere sotto.

How was it done? Bindi’s jumping off point was German artist-animator Oskar Wilhelm Fischinger’s pioneering film, Walking from Munich to Berlin. Although he made it in 1927, it remained unseen for many years. It came about because Fischinger (1900-1967) was under intolerable financial pressure in Munich, where he had lived for several years.

His solution was to slip away surreptitiously with as much of his possessions as he could carry and trek the 550km-plus to Berlin. As he walked he snapped single-frame images throughout each day, so that by the time he arrived in Berlin he had a compressed, stop-frame animated film of his journey.  Bindi’s response to Fischinger’s film was made during her residency in Art Arcadia’s La Mola, in the village of Pietrafitta in central Italy. La Mola is run by Paola Bernardelli and located in the ruins of her grandfather’s grain mill – la mola. Bindi decided on a modest enough 27km walk between two Apennine villages.

She weaves a sonic tapestry – or collage – from field recordings made along the way, but not in the sequential form of beginning, middle and end. She also took many hundreds of still images. She will not necessarily string them together, as Fischinger did, as a film. Film may be her raw material, but not the end result. She derived her project’s circular or even knot-like structure from the vipers she watched for as she walked, coiled in the grass verges.

Is it a typical work by the artist? Bindi has been described as a post-conceptual artist, which seems fair enough, and what she does encompasses both visual and audio elements – installation, a lot of inventive collage (not just audio collage, but visual works using non-photographic materials to take apart filmic sources), sound and more.

She is also active as a curator, with a particular interest in programming experimental film. While film is central to her work, that work does not usually take filmic form. She has worked with her partner Aston Coles, though independently, not as a collaborative. Their sound “group”, dating from 2009, and variously called Blind Squab, Deaf Squab and Double Hook, has made several sound/noise projects.

They are based in Winnipeg, but an acknowledged influence is the memorably named Nihilist Spasm Band, a noise band of some renown dating from 1965 and based in London, Ontario, where Bindi is originally from.

Like the members of Nihilist Spasm Band, she and Coles make their own instruments and some of the related equipment, such as speakers. Her approach and outlook recall the rigour, limitless ambition and freedom of both conceptual art’s heyday in the 1960s and 1970s and the European avant garde of the early 20th century.