Painting was his first love, and the author allegedly wrote The Ginger Man in a pique after his work received a lukewarm reception 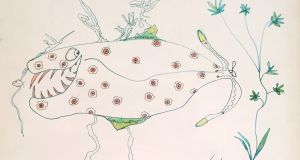 The first love of JP Donleavy, who has died at the age of 91, was painting.

It is said he wrote his most famous novel, The Ginger Man, in a fit of pique. After some bad reviews of his exhibitions in Ireland, he had taken his work to London, where he felt he would be more appreciated, only to be told he wasn’t well known enough.

It’s a dilemma for any artist starting out in the world: how do you join the “famous artists” club, if you have to be famous to get in? Donleavy solved the problem in a unique way, and alongside a subsequent series of novels, published with varying degrees of success, he continued to draw and paint.

A solo exhibition of his work is currently on show at Dublin’s Molesworth Gallery, and it’s worth a visit, not least to see pieces from various periods of his life, although the real treats are his fantastical watercolour, pen and ink sketches, which call to mind Hunter S Thompson’s quote about Donleavy’s writing, that it was “no longer like being dragged into a beer-brawl . . . but more like sitting down to an evening of good whiskey and mad laughter in a rare conversation somewhere on the edge of reality.”

It’s that edge-of-reality thing that makes Donleavy’s quick-fire sketches so much fun. Imagine mad planets in a multi-colour solar system, fish with special adaptations and expressions, and a menagerie of other pleasingly off-kilter visions. Think, perhaps, of Ronald Searle, with a little bit more of an aggressive edge.

These off-the-cuff works make a welcome contrast to his earlier, heavier oil paintings, which are interesting only in relation to the mind that made them. His later works seem to have been made more for the pure pleasure of getting what was inside that mind out into the world.

It seems that when Donleavy left off the need for realism and seriousness, he, and his art, took wings and found they could fly.