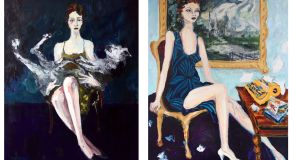 Lapdog and Tempest by Bradley Wood

The winner of this year’s Moth Art Prize – an international prize for figurative and representational art run by The Moth magazine – has been announced. Bradley Wood, originally from Saskatchewan in Canada, now lives and works in New York.

The editor of Modern Painters, Rachel Corbett, has described Wood’s paintings as being “like scenes from a soap opera. The figures in Wood’s cinematic tableaux brood, repose and daydream from inside lushly rendered rooms. Dark, slick swaths of oil paint heighten the drama of these interiors, which seem to unfold directly from the characters’ own mysterious interior lives.”

Bradley will be spending two weeks at The Moth Retreat in October as part of his prize, and will also receive a €1,000 travel stipend. The publishers of The Moth magazine, Rebecca O’Connor and Will Govan, were excited to see the number of entrants double from its inauguration last year – and to note that most of the entries were coming from overseas.

“I suppose there’s a draw to Ireland for visual artists,” says Rebecca. “And the retreat is ideal for painters. There’s plenty of space and light to work, and there’s plenty of peace and quiet – apart from Erskine, our rooster, though he doesn’t tend to crow too early in the morning …”

Wood’s work stood out for Rebecca and Will for its loose and vivacious application of paint, but also for the subject matter – wonderfully witty, eccentric portraits set in luscious New York interiors.

“I am so grateful to the folks at The Moth for awarding me this prize,” says Wood. “I think getting out of New York for a bit will be healthy. My exhibition schedule has been really hectic over the past few years so I’m definitely looking forward to the solitude. It will be an amazing and much-needed time to regroup, reflect on my work and tinker with some new ideas. I’ve actually always been quite affected by my environment, probably more than I realise. So it’ll be really interesting to absorb the area and see how it affects my work there.”

Some of Wood’s work will feature in the current issue of The Moth, alongside a drawing by the Irish artist Michael Wann, whose work was also highly commended in this year’s Moth Art Prize.

The magazine is available to purchase for €5 in Eason and select bookshops internationally, as well as online at www.themothmagazine.com.