People say ‘Don’t you have your own country?’ We reply ‘Mind your own goddamn business’ 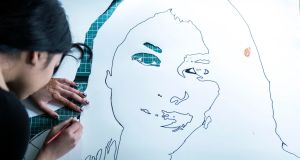 Arriving into View: all of the teenage artists have lived in direct-provision centres. Photograph: Michael Mac Sweeney/Provision

“Take a moment and put yourself in our shoes, because it’s not that easy being in a completely different country and culture,” says Eva Begum, a 17-year-old who is originally from Bangladesh and now lives in Clonakilty, in west Co Cork.

Begum is one of 20 teenagers from direct-provision backgrounds taking part in Arriving into View, an Arts Council-funded project at the Lewis Glucksman Gallery, at University College Cork. Over 20 sessions in six weeks, the participants have been creating a mural that will be unveiled on Culture Night, September 22nd, at Fitzgerald’s Park in Cork city.

Eva now lives in a three-bedroom rented house in the town with her parents, who receive social-welfare benefits

The mobile mural, made up of a number of panels, will later be exhibited in Dublin and, with luck, at direct-provision centres around the country. The unveiling of the mural will coincide with an exhibition of the group’s art at the Glucksman.

The teenagers, who live in direct-provision centres around the city and county – Kinsale Road, Glounthaune, Clonakilty and Drishane Castle – have been working with practising artists to explore their imaginative capabilities away from their restrictive surroundings.

Eva, her two siblings and her parents, who came to Ireland as asylum seekers, received their papers about six months ago after living in direct provision in Clonakilty for 10 years. Eva now lives in a three-bedroom rented house in the town with her parents, who receive social-welfare benefits.

My parents kept me out of the loop about what happened in my country. It was something to do with politics. We got into some trouble and had to flee

“It’s still difficult, but it’s better than direct provision. My older brother and sister don’t live with us any more. My parents kept me out of the loop about what happened in my country. It was something to do with politics. We got into some trouble and had to flee. All I remember is coming to Dublin, where we had to go through an official process. We were put in a hostel for a week, and then we moved to Clonakilty.

“The five of us were put in one room. By then my brother was 14 and my sister was almost a fully grown adult. It was really uncomfortable and awkward. Money was tight, with €19 given to adults and about €9 for each kid per week.”

After “striking and complaining” about living conditions with other residents at the direct-provision centre in Clonakilty, Eva’s sister was given “her own mini-room. It was better than nothing. They put a curtain in the middle of the family room, so my brother had his own space. Things improved, and the food got better.”

But Eva and her Muslim family experienced a lot of racism in Ireland. “We still get that, but it’s not that bad now, because we know what to expect. When people say, ‘Don’t you have your own country?’ we reply that we couldn’t live there, and now we’re, like, ‘Mind your own goddamn business.’ ”

For the mural Eva and the other teenagers have been creating self-portraits. They have also been exploring individual and collaborative art-making techniques in a variety of mediums. With a focus on personal journeys and visual storytelling, the teenagers are being encouraged to develop their own creative processes and skills for visual communication.

The Arts Council funding, worth just over €9,000, has been granted through the Young Ensembles scheme. It pays for transport and for the professional artists guiding the teenagers.

Tadhg Crowley, curator of education at the Glucksman, says the project is “a continuation of what we’ve been doing for the last few years in the museum. It began as work with younger children in direct provision, and it is being facilitated by our colleagues in UCC, Mike Fitzgibbon [from the food-science department] and Jacqui O’Riordan [from applied social science]. They’ve been working with the direct-provision community for 15 years or so, building relationships and trust that has allowed us access the community and invite them into the museum.”

Crowley points out that there have been projects in other direct-provision centres, but “we feel that getting the teenagers into the museum is a huge part of what we do. We’re inviting them into a public space. They can feel a sense of ownership of the area. Also, it’s getting them into an atmosphere of creativity other than the possibly more stagnant and lethargic atmosphere that’s in the direct-provision centres . . . The direct-provision community is often kept on the periphery of society, never really having the opportunity to fully integrate with their locality as they wait in a state of limbo.”

That limbo is being experienced by Thamarai Premareji, or Tammy, who is 15, her 13-year old brother, Pahalavan, or Paul, and their mother, a qualified doctor, who have been living in the Ashbourne direct-provision centre, in Glounthaune, for 18 months. The father lives and works in the UK; the family communicate with him via Skype.

Originally from Sri Lanka, the family went to live in Durban, in South Africa, because of the civil war in their country. But they experienced xenophobia there and sought asylum in Ireland.

“We’re living in a master bedroom, and we have our own kitchen, which we were lucky to get,” says Tammy. “There’s a lot of freedom in the Ashbourne centre, and workshops are held there, run by volunteers. Older people are taught English. The teenagers are taught rowing, and there’s a creche for kids.

“I think the other direct-provision centres are a bit cramped, but Ashbourne is very open. It’s better than the others. I’ve been coming to UCC for an internship programme in the Glucksman and to work on the mural. When I leave school I want to go into medicine, but I also like art.”

Murals can reach out to problems in society. There’s a big piece in ours that says ‘Speak up’. It’s about knowing your rights and listening to others

Tammy has enjoyed researching murals as part of the art project. “We learned about Mexican muralists, and we learned different techniques, like identifying shapes and patterns and putting them together. We’ve done some carving and printing. It has really helped our skills.

“We also learned that modern murals can reach out to problems in society. There’s a big piece in the mural that says ‘Speak up’. It’s about knowing your rights and listening to others. We’ve done actions and taken pictures of groups of us to convey our message. I’ve learnt about the other children that come into the Glucksman. Each person has a different perspective on art, and we all have different talents.”

Tammy hopes that the mural “will help people to recognise people like us, to find out who we are and what we want to achieve”.

When we get our papers we can meet our dad. There are a lot of other children in Ashbourne, so that kind of takes my mind off things

The message that Tammy’s brother, Paul, would like to express through the mural and his other art work is “to always be yourself”. He is making friends at school and in the centre. “There’s a lot of different cultures in Ireland. That’s good, because you learn about other people.”

Paul’s ambition is to become a civil engineer. He says he is “a bit lonely” for his father. “When we get our papers we can meet our dad. I’m making the most of things. There are a lot of other children in Ashbourne, so that kind of takes my mind off things.”

But he says that it’s easy “to become bored” in the centre. That’s why the Glucksman project is such a worthwhile and fun endeavour for these teenagers who are being given a voice.