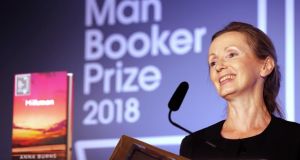 Writer Anna Burns smiles after she was presented with the Man Booker Prize for Fiction 2018 for her book, Milkman, at the Guildhall on October 16th, 2018 in London. Photograph: Frank Augstein/ WPA Pool/Getty

Aosdána, the affiliation of creative artists in Ireland, elected its new members at its annual general assembly in University College Cork on Friday.

Anna Burns became the first author from Northern Ireland to win the Man Booker prize last year for Milkman, a novel set in the Troubles about a young woman being sexually harassed by a powerful man.

Founded in 1981, Aosdána was established by the Arts Council to honour artists for their contributions to Irish society and to support them in their artistic endeavours.

Membership is capped at 250 living artists from a range of creative disciplines. All members are elected by their peers and are entitled to avail of an annual grant, known as a cnuas, worth €17,850 a year for five years.

A minute’s silence was held to remember members who had died since the last assembly.

Artists must be nominated and then elected by their peers to join.