Guys got talent: meet the Dublin duo spicing up our TV screens

Dancers-turned-creative directors Johnny White and Ciarán Connolly have turned their telly experience to work with The Spice Girls, Eurovision and Ireland’s Got Talent 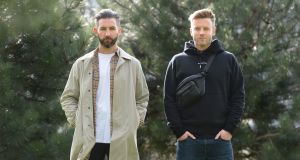 It’s a Wednesday morning in the Helix theatre in DCU, and preparations are afoot for the semi-final and final of Ireland’s Got Talent. The seats are empty and the stage is sparse. No bright lights, no judges, no nothing. Just MacBooks, buzzing phones and tracksuits. It’s a world away from the glitzy spectacle regular viewers have grown accustomed to.

Behind the judges’ panel desk, Johnny White is waving his hands around like a conductor as eight dancers rehearse one of the weekend’s big musical numbers. On stage, Ciarán Connolly is acting as a stand-in for the lead performer. “That was fab . . . ish?” says White after one run-through.

In between run-throughs, White and Connolly consult with each other about what’s working and not working. They issue instructions to dancers and try to come up with solutions to problems that have presented themselves. The pace is relentless, but it’s all in a day’s work for the duo.

As Locked Creative, they serve as the show’s creative directors, an all-encompassing term that means they oversee choreography, lighting, styling and visuals. Connolly describes it as someone “who can look at the overall picture and can just pull it all together”.

“In the past you would have just had the director, the lighting designer, the graphic guy, the choreographer,” adds White. “Over the last 10 years, this creative director title has formed into someone who controls it all and runs that whole aspect of the performance.”

Since forming their partnership four years ago, they have worked on everything from television commercials to large-scale talent shows. How did they get here?

Both White and Connolly originally hail from Dublin. As youngsters, they both gravitated towards performing and dance (Connolly is a proud Billie Barry Stage School alumnus). In the early noughties, they both moved to London to pursue careers in dance. White spent three years studying at a performing arts school while Connolly landed a background role in the film Mrs Henderson Presents.

We kind of knew of each other, but we came from different worlds in Dublin. Our careers brought us together

From there, they each landed gigs dancing for pop artists. White worked with the likes of Rihanna, Girls Aloud, The Saturdays, Little Mix and One Direction, while Connolly toured with Take That for 12 years. They also scored television gigs and worked as series dancers on the likes of The X Factor, Strictly Come Dancing and Britain’s Got Talent. Last year, White was seen in Mary Poppins Returns as one of the “leeries”, which marked the end of his dance career.

The pair did not know each other before moving to London. “We kind of knew of each other, but we came from different worlds in Dublin,” recalls White. “Our careers brought us together.” They first worked together on Tonight’s The Night, hosted by John Barrowman.

As their dance careers began to wind down, both Connolly and White began to assess their next steps. “You get to a point where you’re like, ‘Oh God, what’s next?’” says White. “Your parents can tell you until they’re blue in the face that you need to have a back-up plan but until you get to that point, you’re like, ‘I didn’t listen.’”

Many dancers get into choreography, teaching or fitness, but both White and Connolly had caught the television bug. They spoke about working together. “We did a corporate event as a giggle and we were like, ‘This kind of works,’” says White. “We pitched to come back here to do The Voice of Ireland three years ago and we did the last season over there. That was our first TV thing.”

Since then, they have worked on a whole host of television shows, commercials and live events. Last year, they were responsible for putting together Ryan O’Shaughnessy’s performance for Eurovision, which garnered huge praise for featuring a gay couple.

For the last two months, they have been working on Ireland’s Got Talent. Since then, there have been countless mood boards, treatments, email chains and Skype calls. “You work on it every day,” says White. “It turns into your baby.”

Both White and Connolly pride themselves on their dealings with the acts. They are personable and work to cultivate meaningful relationships with each individual or group. That can mean helping a performer discover his/her identity or consoling an upset youngster.

Despite tight budgets and a small team, they believe the show punches above its weight with its production values

“Some of the nice feedback about this show is the feeling that it has a nice warmth to it,” says Connolly. “We like to conduct ourselves like that with the contestants. We work around them and how they feel and get to know them a little bit.”

“We do like to get to know them so they put their full trust in us,” adds White. “We grow attached to them.”

The pair have been impressed with the standard of talent on this year’s show, singling out the dance acts for special praise. “Dance is huge in this country,” says Connolly. “Which it wasn’t when we were training,” adds White.

They are also enormously proud of their own work on the show. Despite tight budgets and a small team compared with its international counterparts, they believe the show punches above its weight with its production values.

“I think Irish people have a thing about these Irish shows because for many years they didn’t stand up against the others, but now we are,” says White.

After the show concludes on Sunday, White and Connolly will fly back to London to start work on the forthcoming Spice Girls tour where they will serve as part of the show’s choreography team. It is their second time working with the group, having previously danced alongside them at London 2012. While they can’t reveal anything about the show itself (it’s top secret, naturally), they promise a spectacle. “We’ve been in meetings these past few months and it’s amazing,” says White.

With that, it’s back to work. After all, live television doesn’t come together itself.