Even before Covid-19, there were signs the young faced greater challenges than their parents 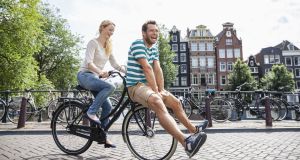 “Come fly with me. If you can use some exotic booze there’s a bar in far Bombay. Come on fly with me…”

Yeah, hold your whisht, Sinatra. Even the most febrile optimist would admit a golden age for travel has come to an end. We all lose. But the young and the less privileged lose most of all. A natural order has been reversed.

The recent death of Tim Brooke-Taylor reminded us that, as well as being a member of the Goodies, he was co-creator of the justifiably legendary Four Yorkshiremen sketch. First screened on an episode of At Last the 1948 Show (no, not Monty Python) in 1967, the segment found four old bores trading horror stories of their wretched upbringing. “There were 150 of us, living in a shoebox at middle of the motorway,” one famously remarks. “You try and tell the young people of today that, and they won’t believe you.”

The melioristic notion that life is always easier for the next generation continued largely unchallenged for another 50 years. Yes, there were periods of high unemployment and deprivation, but the trend was still towards more comfort, wider education and longer life expectancy. The young looked forward to eating cronuts on Mars in their middle-100s. The old could revel in recreational disdain for a generation of long-haired milksops who grew up without having to wrestle the morning milk from invading stormtroopers (or cope with telly stopping at 11pm in my case).

Even before the Covid-19 outbreak, there were signs the young faced greater challenges than their parents. The 2008 depression was followed by a qualified recovery that put accommodation outside the grasp of those who didn’t habitually wear monocles. Yet there was still so much more to do.

We had to save up bottle caps for months to afford the latest Rip Rig and Panic album. Young People Today have the entire history of recorded music at their disposal for a tenner a month. There are fewer legal restrictions on sexual freedom and body autonomy. Irish culture is more diverse. The food is better. Foreign travel is so much easier and cheaper. Heck, you barely needed to adjust for inflation to argue the last case. Until now.

It seems unlikely we will soon get back to the globe-trotting that set in during the 1980s and 1990s. Airlines are shutting down. Whole routes are set to vanish from the maps. Carriers are likely to discount flights in the early days of reopening, but the debt incurred over the preceding months will have to be recovered. If flights begin with social distancing in place then the concomitant reduced capacity is also likely to elevate fares. The rich will always find a way. But it looks as if the coming generation will not be travelling nearly so much as their lucky parents.

The arrival of package holidays in the 1970s put air travel within the reach of ordinary people. But a flight still counted as a luxury. Deep into the 1980s, only comfortably well-off travellers would take a plane from Ireland to London.

If you are desperate for some Four Yorkshireman-style travel yarns (you’re not) ask anyone who was a student in those years about travelling from, say, Limerick to Victoria Station by bus and ferry. It took a whole day, but it was almost as cheap as flying with Ryanair a decade later. My friend Glenn and I did it in 1981. We never got to fight the Nazis, but we did endure a 4am lavatory break in Birmingham.

The near-unfettered access that followed the budget revolution made Marco Polos of us all. Folk would randomly fly to Skopje because some website offered a ticket for a tenner. A few years earlier, asking your friends to travel to Tallinn for a party would be akin to asking them to join you on an orbiting space station. By the late 1990s this was standard practice for hen and stag weekends. My mother has, in recent decades, travelled at reasonable cost to the US, Africa, Australia and Canada. Her mother never left Britain and Ireland.

The carnival is over. Emigrants in remote countries will not be able to take as many trips home as they used to. The opening-up of minds that results from a zip round the Rijksmuseum or — from a different perspective — a visit to a coffee shop in the same city will no longer be so cheaply available.

This country is, thank heavens, not going to become significantly less cosmopolitan. Immigration tore us from the monocultural backwater forever. Digital media keeps us connected to global conversations. But a whole generation is about to have a series of doors closed in its face.

Try and tell the old people that and they’ll never believe you.