I chose to grow a beard for the first time, with distressing results

Just as Newton experimented with light during the Black Death, I could experiment with the grooming habits of the Iron Age 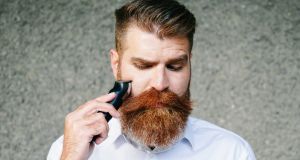 There has also been chatter about the stuff on your face. Photograph: RoBeDeRo/Getty Images

There has been much talk about hair over the last few months. The communion of bald gits, cutting our own sparse mop for years, snort as our toilet remains unaltered. Who’s laughing now? There has also been chatter about the stuff on your face. Why did I (among others) choose to grow a beard for the first time. Razors are available. Hot water is still coming through the pipes.

Two things really. In the past, any protracted period of facial negligence produced nothing more robust than the wispy fungus that gathers on tomatoes left too long in the larder. Brian Blessed need not beware. Maybe I had reached the age when fecund tufts would prosper. Second, there was, of course, the advantages of isolation. Few creatures other than the cat and the lady in the supermarket would have to endure my untended face and its sprouting filth. Just as Newton experimented with light during the Black Death, I could experiment with grooming habits of the Iron Age.

There was, mind you, less temptation to grow a beard in my youth. Back then, facial hair was largely a maritime interest: pirates, castaways, submarine captains – those sorts of things. We have had a gay Taoiseach, but we have never had one with a beard. The UK now has an unmarried father in 10 Downing Street, but it hasn’t had a bearded prime minister since Lord Salisbury in 1902. The Americans, who have welcomed at least one maniac into the Oval Office, haven’t endured a properly hairy President since Benjamin Harrison in 1893.

Until recently, that decoration was seen as evidence – in the “straight world”, anyway – that you were not a serious person. It was like owning a salamander or wearing sandals in company. By the 1980s, even the beard’s durable association with bohemia had become strained. You wouldn’t have seen Mark E Smith or Martin Amis wearing such a thing. Those bloody hippies really did a number on it.

At any rate, there was no pressure to leave the stubble untended. Decades passed and many of us, despite occasional outbreaks of tomato fungi, never got to realise a little-considered potential. Every shaved man lives with the knowledge that he has a theoretical beard waiting to reify itself. This is not much like the novel you are never going to write or the child you will never sire. At any point in life, the ghost beard has a particular colour, density and texture.

As years pass, those qualities, still not manifested, change in large or small ways. While you’re busy being prime minister or running ICI, the immaterial facial hair is becoming thicker and greyer. Once it may have matched the stuff on your head. Later it might not. As a youngster you may have been able to manage nothing more than a light dusting. In middle-age, the full WG Grace was, perhaps, just waiting to descend towards the waistband.

It is hard to pin down when the beard came back into fashion. Somewhere in the millennial years an unwelcome rehabilitation of hippie aesthetics spread goatees about the cheese-mongers of Brooklyn and the alt-pastry chefs of Portland. There hadn’t been so much hair on the adam’s apple since The Band’s second album. It was no longer acceptable to confirm your manhood by beating up unwelcome outsiders in the local pub; you could now do so by setting down the Wilkinson Sword for a few weeks.

Come the Great Pandemic, realising the hitherto theoretical mane seemed, thus, a less eccentric endeavour than it would once have been. (The last time I had gone so long without touching a razor, Jimmy Carter was president.) The upper half still had shards of red within it, but, to my surprise, the greater part was almost entirely white. Within three weeks, something unexpectedly bushy had broken out on cheeks where once only the weediest thread struggled up. It was like growing another limb. It was like finding a new room in the house you’d inhabited for 50 years. Winter employment as Father Christmas – and summer cracks at King Lear – beckoned.

The beard got good reviews on social media and more mixed notices from the few associates I met in public. (“Get it off, now!” sticks in the mind.) Here’s the problem. It had managed the very thing teenagers wish for from such a growth: in the space of a month I looked 10 years older. As the days progressed, soup began to lodge in overhanging sections of the moustache. Life as a superannuated incarnation of Roald Dahl’s Twitts proved too awful to contemplate and, with weeks of isolation still to go, it was hacked back into the virtual.

There is still time for it to return. After all, I’m not as old as I looked on Tuesday.