I’ve been embracing social distancing with great enthusiasm since 1998

Donald Clarke: Nobody dares hug you now. The chances of a fraternal kiss are slimmer still. It’s great 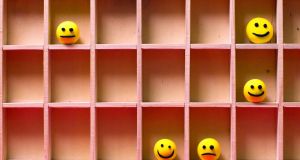 Oh, hang on. Yes, I can. It was around 1998 or so. In the intervening years, I’ve done a good job of clutching pot plants to my chest or positioning myself behind trestle tables when anyone threatens a continental lunge. The current Emergency has been a godsend for those patriotically wedded to the sanctity of personal space. Nobody dares hug you. The chances of an uninvited fraternal kiss are slimmer still. It’s like 1975 again. Only it’s better because we’ve got Netflix and you can buy garlic in Spar.

My signature memory of the Emergency – the repeated moment that comes into the head when one thinks back – will be the trek around the sci-fi variation on Dunnes Stores that currently sits beneath the Stephen’s Green Shopping Centre in Dublin (allow me to momentarily suspend snark and note that the staff have been first-class throughout). As in all the best dystopian fantasies, boldly designed signs bark commands at you while a soothing voice dispenses psychological soma over the Tannoy. “In Ireland, we’re friendly,” the man intones. “And we’re not afraid of showing it.” Speak for yourself, Little Brother. I’ve lived a happy life while restricting physical displays of friendliness to only those who, after decades of acquaintance, have filled in all the right forms.

A proper discomfort with uninvited hugging, kissing, back-slapping and shoulder-rubbing used to be one of the things that bound this island together. Higher versions of the Church of Ireland were not wholly sound, but you could count on non-Conformism and our version of Roman Catholicism to shun vulgar adventures in physicality. A variation on social distancing was in place from the 5th century until – I’m estimating here – the Nice Treaty in 2003. Some unwelcome loosening of tension had been afoot since the 1960s. There is no better reason to avoid Church than the horrible “sign of peace” business that asks us to smile idiotically at complete strangers as if we’re recovering from a screwdriver in the temple. The introduction of spaghetti Bolognese and unisex hairdressers in the 1970s brought with it a concomitant embrace of, well, embracing. But it was not until the current century that, on meeting, we habitually groped one another like the citizens of Rio de Janeiro.

You wouldn’t catch Brendan Behan or Elizabeth Bowen offering their cousin’s interior designer a “mwah, mwah” kiss on first meeting. Like many inhabitants of sensibly uptight northern regions, we grew up with an awareness that the body was shameful – a damp collection of organs loosely packed into a hairy pink membrane – and that nobody outside a tight circle of friends and physicians should be compelled to touch the horrible thing. Look at the characters in Ingmar Bergman films. You couldn’t say they are without emotion, but, dignified in reserve, they save up the passion for genuine crises: your dreadful stepfather’s death, the death of God, losing at chess to Death himself. That’s the northern way. If it was good enough for Erik the Red then it is good enough for us.

Here comes the disclaimer. Of course, many normal Irish folk of all ages enjoy hugging friends and family. Though it pains me to break character, I have sympathy for older people who are unable to go among their children and grandchildren. One could reasonably argue (though I wouldn’t) that it’s better to pass through life without a stick up your passage. One might even argue that this entire column is taken up with desperate exaggeration for comic effect.

Are there any sweeter words in the English language than 'I told you so'?

It is, nonetheless, true that some borderline-sane citizens really do yearn for an Ireland in which every second commentator didn’t boast about being “tactile”. (You don’t hear Joe Biden saying that much these days.) “As a tactile person, I find the current isolation particularly trying,” they post above photographs of homemade raspberry scones. “I can’t recall when I last hugged a friend.”

That aspect of the shutdown doesn’t bother those of us who oppose the continuing shift towards Mediterranean emotional profligacy. We are delighted by the absence of proffered cheeks and reaching limbs. We rejoice in not being told to “loosen up”. Most of all, we celebrate the experience – among the greatest available to any human – of being right all along. Look where all that hugging and smooching has got you. You’re not nagging us now. Are there any sweeter words in the English language than “I told you so”? (No.)

Live Aid: the day Bob Geldof dropped the F-word. But what did he say exactly?
6

Dermot Kennedy: ‘You can stay credible without forgoing success’
8

Anne Enright: ‘Nuala O’Faolain was an impossible person, to whom we owe so much’
10