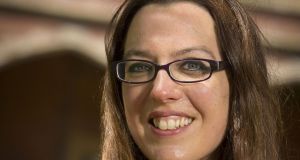 Máire Zepf, the first Children’s Writing Fellow at Queen’s Univerity Belfast and Seamus Heaney Centre, has won the Book of the Year Award for her verse novel Nóinín

Five women have been recognised in the KPMG Children’s Books Ireland Awards 2020, announced by broadcaster Rick O’Shea, in a ceremony shared online for the first time in the awards’ 30-year history.

Máire Zepf, the first Children’s Writing Fellow at Queen’s Univerity Belfast and Seamus Heaney Centre, has won the coveted Book of the Year Award for her compelling verse novel Nóinín that depicts, with beguiling subtlety and nuance, the online grooming of a shy teenage girl, the slow build-up to a shocking crime and the aftermath from the perspective of her best friend.

Judges praised the rich imagery, poetic language and intertextual references to fairy tales and Irish myth which lend resonance in this very modern and accessible tale of the dangers of social media.

The awards are the most prestigious prizes for children’s books in Ireland and celebrate the very best of Irish writing and illustration for younger people, and this year the prize fund doubled compared to last year, with thanks to new title sponsors KPMG.

The winners include authors and illustrators of three verse novels, two books written in the Irish language, and two dealing with topics around dementia, with two awards going to artists from Northern Ireland and two to artists based in Donegal. The winner of the new KPMG Reading Hero award was also announced, recognising a young person’s potential and celebrating their remarkable passion for books.

Ireland’s former Laureate na nÓg Sarah Crossan won the Honour Award for Fiction for her verse novel Toffee, a lyrical and moving portrayal of the relationship between a teenage girl who has run away from her abusive father, and an elderly woman with dementia, who mistakes the girl for a close childhood friend. Judges commented that each poem is a gem in itself and that through deft storytelling and masterful characterisation, complex themes of identity, child and elder abuse, memory loss, loneliness and connection are explored with sensitivity, honesty, warmth and respect.

Ashling Lindsay won the Honour Award for Illustration for her artwork in The Tide (written by Clare Helen Welsh), a poignant portrayal of a young girl coming to an understanding of her grandfather’s memory loss which is ultimately uplifting and enlightening for child and adult readers alike. Judges noted the exquisite illustrations, with gentle rhythms mirroring the ebb and flow of the tide, memory and the passage of time, and in particular a stunning double spread depicting the pair dancing at sunset creating a glorious sense of harmony that assuages earlier moments of disquiet.

The Eilís Dillon Award for a first children’s book went to Kim Sharkey for Mór agus Muilic, a stunning retelling in picture and text of an unusual and dark tale from oral Irish culture as told by John Óg Hiúdaí Neidí Ó Colla. Judges remarked on the rhythmic repetition of dialogue and the sumptuous and evocative illustrations which create a hypnotic sense of movement as a growing cast of characters join the elongated Mór and the jester-like Muilc in a dance towards their doom. This award is named in honour of the revered Irish children’s author Eilís Dillon, whose birth centenary was on March 7th.

The Judges’ Special Award this year goes to Meg Grehan for The Deepest Breath, a thoughtful, exquisitely gentle and heart-rending verse novel that explores with a superb lightness of touch important themes relating to anxiety, emerging sexual identity, friendship and love. The lyrical narrative captures with great delicacy the fragile voice of an eleven-year-old girl, whose feelings for her friend both excite and confuse her as she seeks understanding and affirmation from her mother. The motif of water, of drowning and breathing, lends a dreamy atmosphere to this tender, courageous and ultimately uplifting story.

The new KPMG Reading Hero award was presented to Harry Darcy, a young reader from Gorey, Co Wexford. Harry’s best friend Rossa nominated him as his “book guru”, saying: “Harry always has his head in a book no matter where he is. On the bus, on school trips, in the car, on the subs bench at matches waiting to take to the field, in class when he is supposed to be doing something else (driving the teacher mad) and even at his own birthday party.

“Reading and rugby are his two favourite things, and he has been known to do both together. I don’t know any other person in the world that reads as much as my friend Harry.” Teachers, parents, guardians, relatives, friends and librarians from all across Ireland were asked to nominate their KPMG Reading Hero.

Children’s Books Ireland CEO Elaina Ryan said: “In an unprecedented time for Irish artists, we are prouder than ever to celebrate these truly excellent books and, for the first time, to recognise a remarkable young reader for their achievements, too.”

KPMG managing partner Seamus Hand said: “Congratulations to all the KPMG Children’s Books Ireland Awards winners and our thanks to everyone who participated. We’re very proud to support these awards which reinforce KPMG’s commitment to literacy and our passion for learning in general and reading in particular.”

The KPMG Children’s Books Ireland Awards recognise excellence in writing and illustration in Irish or English and are open to books by authors and illustrators who were born in Ireland, are permanently resident in Ireland or are citizens of Ireland and which were published between January 1st and December 31st each year.