The Kerryman building for the future in Dubai

Wild Geese: Engineer Shaun McGinley is working on one of world’s most futuristic buildings 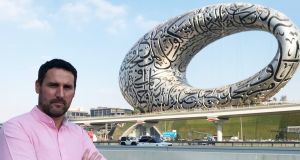 Shaun McGinley outside the Museum of the Future in Dubai

The small Kerry town of Tarbert is a long way from the sparkling lights and bold buildings of Dubai, but the opportunity to work on a project for the future was too good to resist for Shaun McGinley.

“Dubai wasn’t on our radar but when the opportunity to work on an iconic, destination building came up, I couldn’t say no.”

After finishing school in 2000, McGinley studied engineering in Waterford and started working for BAM, the Irish subsidiary of Royal BAM Group of the Netherlands.

“We cover the entire spectrum of construction and have delivered some of Ireland’s flagship infrastructure and building projects with sister companies around the world,” he says.

“The first job I worked on was Cork Airport in 2003 as a senior engineer. The project involved the construction of a new terminal building and ancillary works to increase capacity from 1.1 million to three million passengers per annum.”

He went on to project manage numerous builds in Cork, including City Gate Park, Curraheen hospital, Cork University Hospital and, most recently, the seven-storey 15,800sq m (170,000sq ft) office development One Albert Quay and the Capitol in Cork.

The projects were big and prestigious but, when an offer came up to project manage one of the world’s most futuristic new builds in Dubai, McGinley couldn’t say no and his wife and young son moved to the United Arab Emirates in 2017.

McGinley is working with BAM International which deploys the contracting activities of Royal BAM Group outside of Europe.

“Needless to say say, it was an exciting opportunity. The project called ‘Museum of the Future’ was meant to be created for Expo 2020, which will now happen in October 2021, due to coronavirus. The building will be a huge tourist draw.

“It’s not a conventional museum with artifacts, paintings and historic exhibitions; it’s going to be an incubator for new and innovative technologies, AI hot spaces and high-tech futuristic ideologies.”

Occupying a prime location in Dubai at the northern corner of the Emirates Towers plot on the road into Dubai from the airport, it’s hard to miss, he says.

An initiative of the Dubai Future Foundation led by Sheikh Mohammed bin Rashid Al Maktoum, ruler of Dubai, the museum is housed in a stainless steel structure, topped by a torus eye with embossed stainless steel covering and outlining Arabic calligraphy.

“It’s already being spoken about like the Burj al Arab and Burj Khalifa. It really stands out. The facade is glass fibre, like what they use in aviation. It’s double curved, with very complex glazing.

“The museum pushes the envelope when it comes to sustainability and building technology. It draws power from a solar plant and provides charging facilities for electric cars. The Museum for the Future, will be home to research centres with labs, and offer a platform to demonstrate the latest inventions and prototypes.

“Obviously, we are working hard to get it finished by October for the Expo for which 25 million people are expected to visit Dubai. You work six days a week, and work on a project like this isn’t straightforward.

“We had a strict lockdown in March but even now we are getting cases on site. On the plus side, we’re in the middle of winter, which is fantastic. But come March, the heat gets unbearable.”

McGinley says the mercury often hits 50 degree, making summers painfully hot. “From October to March, this is the best place to be. We get the best weather – mid to late 20s, but then [in summer] you can’t go outside. Many expat full-time mums leave with the children in the summers to go back to their home country so there’s only men around in July and August.”

McGinley says there are about a dozen Irish people on the team in the UAE metropolis, so they socialise and play sports.

“There’s a lot to do here. Weekends are spent on the beach, and the food and night-time offering is exceptional. Dubai is more liberal than you may think and there’s so much to offer. Though you wouldn’t want to go to jail here.”

In the last 30 years, the city has sprung up from what was a fishing port with 470,000 inhabitants to a destination of ultramodern architecture with structures like the 830m Burg Khalifa, artificial islands and ultra-luxurious hotels and a population of almost three million people.

“In terms of the visa situation here, my employers organised the residency visa, which can be renewed. Traditionally people come over to Dubai via a company they are employed with, or with a job offer in hand. But many more are coming over and looking for work when they get here.”

Dubai is tax free but McGinley says life doesn’t come cheap. “You spend around €40,000 in rent per year here. A pint of beer is around €10. So you pay less tax, but you pay for more life. Even groceries are expensive.

“On the plus side, you can literally leave your wallet and phone sitting somewhere and it will be there when you get back. There’s something comforting about that. It’s incredibly safe here.”

McGinley says Dubai had a strict lockdown but is now vaccinating people quickly.

“Although there are cases in Dubai – [there were] around 26,000 infected people in mid-January – it is more open than Ireland. We get to enjoy the beach and swimming pool when there’s a pandemic on. You can also go for meals and socialise outside.

“I’m not quite sure what project I will be working on, once this one is completed, but we have settled here in Dubai. My family like it here, and my wife, who is expecting a baby, has lots of social contacts too.

“Obviously it’s an amazing place to raise children, because you spend so much time outdoors and there’s so much on. So I’m open to another mega project, should it come along.”