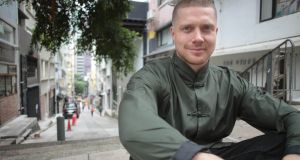 Hong Kong may not spring to mind as a hotspot for daytime DJs, but Barry O’Brien found his groove there.

Originally from Malahide, Co Dublin, O’Brien first left Ireland in the late 1990s after completing his Leaving Cert. Manchester was the epicentre of the clubbing scene at the time, hence a clear choice for his first move.

“I went there in 1999 to study hospitality and tourism while working as a DJ at student parties. I played everything from reggae to hip-hop to dance and started booking DJs, working as a co-ordinator and finding talent.”

After completing his degree, O’Brien worked across the clubbing spectrum before moving back to Dublin in 2005, where the Celtic Tiger was in full swing.

To expand his skills O’Brien completed a music-production course at the School of Sound Recording. “I also ran club nights in Kennedy’s in Westland Row and various gigs across the city.”

He also founded Moss Records, named after the famous Jamaican drink. “It’s a reggae-based label, dedicated to pushing vinyl releases as well as dancehall, hip-hop, breakbeat, dubstep and house music. We seek out the best artists from roots reggae to electro and any subgenres in between.”

It was a busy time. “The nightlife scene in Dublin was kicking, but then I was approached by a music company in London called Shop Your Music, which worked with advertising agencies, films, TV, etc for various products, and commercial work. So my now wife and I moved over to London in 2012, where we spent five years.”

During his time there, he set up Spice Bag Records, while working as a DJ regularly in clubs and at festivals such as Boomtown Fair and the Isle of Wight.

“London has a great club scene and there is always something going on. It’s a big place so it was great to move over and house share.”

But, in 2018, Hong Kong came calling as an opportunity presented itself for O’Brien’s wife, Cassie. “I came along on a co-dependency visa with her, which meant I could find work.”

O’Brien says he was surprised to find opportunities for DJing and promotions. “Obviously the clubbing sector is not as edgy and free as it has been in Europe and other places around the world, but there is music everywhere. There are DJs at restaurants, hotels, bars, rooftops across the city, which makes for a vibrant scene.

“There is a real DJ economy in Hong Kong and I have work, doing between three and five gigs per week. The best part is, they often take place during the day, so I do a brunch in a hotel and finish up at 6pm. When you get older and have a small family as I do now, these are very sociable hours.”

O’Brien says DJs are territorial, but work is out there simply because of the scale of the city, which houses 7.5 million people.

“It’s very busy. In London, you hibernate during the week, do a weekly shop and stay at home and cook dinner. Then you might go out at the weekends. Here you don’t do weekly shops, you eat out midweek or meet someone in a bar. It’s kind of like student residences for people with money.”

He says, money is pertinent to survival in Hong Kong. “I’am still working on my label and various offshoots so, with my DJing, I’m doing well, but it’s not the kind of place you would come on your own. You need to split the rent.”

“You pay between €2,000-€3,000 for a shoebox. It’s crazy expensive so most of the Europeans you meet here come with their significant others.

“We got lucky recently when friends moved out and we got their place with a small patio. In Hong Kong that’s worth gold, as space is at such a premium.”

O’Brien says his career has been affected by Covid-19, which originated in Wuhan, China, less than 1,000km from Hong Kong.

“I was working at the Mandarin Oriental Hotel in Hong Kong when tight lockdown restrictions were put in place. But after one tough spell, things started getting back to normal in spring.

“People had to book tables for no more than six people and occupancy was reduced, but they were still hiring DJs around town – one of the few places in the world, as the industry has sadly been decimated in Europe.”

Strict restrictions, testing and strict hotel quarantines saw the virus come under control, he says. He even managed to come home for the holidays, after much red tape.

All passengers arriving into Hong Kong are required to undergo medical tests and quarantine in a hotel for two weeks. “Only residents with certain documentation can leave Hong Kong and come back in again.

“We followed all the protocols to come home and quarantined there too, so we lost a good bit of time, but it’s worth coming home for Christmas.”

Upon return to Hong Kong, a strict stint in a basic hotel follows, which he describes as “no fun”.

Despite the political restrictions and recent unrest, O’Brien says Hong Kong is a great city. “I was able to work in the past months. When I left before Christmas, things were happening in the city and there was a nightlife, unlike home.”

Hong Kong wasn’t on the plan, but O’Brien says it has been a pleasant surprise.

“Of course you miss things about home – a nice hike in the middle of nowhere or being with family and friends, but we have a good life here in somewhat of a bubble.

“I have friends who are starting to leave but we’re going to stay because, right now, there are opportunities and life is continuing, where in so many places it is on pause.”