New Zealand will next week ease some of the world’s strictest lockdown measures taken to tackle the coronavirus pandemic, Prime Minister Jacinda Ardern said on Monday, after a month of tight restrictions slowed the spread of the disease. Video: Reuters 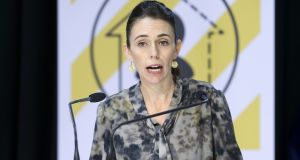 Thursday did not start well for Matt Hancock. Britain’s 41-year-old health secretary began a morning television interview looking like a glummer version of the chipper Cheshire-born economist he was before he became an MP 10 years ago. It got worse as he was pounded for a string of government blunders over coronavirus testing and equipment failures.

Then came a question that went something like this: In New Zealand, where they have had just two Covid-19 deaths per million people (in the UK it’s more than 200) prime minister Jacinda Ardern has just said she and her ministers would take a 20 per cent pay cut to show solidarity with those struggling financially because of the outbreak. Will you?

The first thing I thought about this was that it was unsurprising. Ardern has been a model of compassionate leadership in this crisis. The second thing I thought was the leaders she is showing up must be starting to loathe her.

It’s not that she is perfect. Before the outbreak she was in trouble for failing to deliver on a slew of housing, poverty and tax plans, having once declared 2019 would be her government’s year of “delivery”.

She is also in charge of a relatively remote and uncrowded country that the virus took longer to reach. And it is too early to be certain of her ultimate success.

Yet astute Londoners stranded in New Zealand during the crisis, and others who have recently moved there, confirm there are at least four important Ardern leadership lessons that deserve attention, starting with her under-appreciated command of detail.

One day during the 2017 general election campaign that eventually resulted in her prime ministership, she toured a factory that made fibreglass insulation known as pink batts.

As a New Zealand Herald journalist wrote at the time, when she was asked a few days later if she could remember what a batt was made of, she said it included recycled glass. What kind of glass? “Off-cuts of window glass.” What temperature is the molten glass when heated? “1,200 degrees.” And so on.

A mastery of minutiae may have helped Ardern deliver a second lesson in the importance of co-ordination, which is said to be very evident within her government.

Contrast that with what happened to me last week as I tried to pin down why the UK’s Covid-19 travel restrictions were so much looser than those in other countries.

Care for detail and co-ordination leads to a third factor: smart policies, like New Zealand’s plan to fund wider pavements and cycle paths to help people stay further apart. Or the two dedicated education TV channels it has launched to help home-schooling. Or the effort to send thousands of laptops and learn-from-home materials to students, while trying to boost their internet connections.

It is even better if, while doing all this, you are honest enough to say there will be problems.

“This is a big complex project that is being undertaken at pace, so we know it will take time to get it right,” the New Zealand education ministry says on its website. Compare this with other leaders’ repeated insistence that no mistakes have been made, a dangerous ploy at a time when public trust is vital.

Ardern’s communication skills have already been praised in this column. Since then she has doubled down, confirming the Easter bunny was considered an essential worker.

And when asked if she had contacted the New Zealand nurse Boris Johnson said had helped him survive Covid-19, Ardern said she had tracked her down on Facebook and sent a message.

Yet the main point is not just that she is caring and outwardly normal. She is also clearly competent at a time when so many others are not. – Copyright The Financial Times Limited 2020