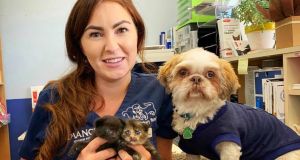 When the last recession hit Ireland, it created a mass exodus of young people, leaving the country for Australia to start a new and hopefully better life. Many of them came back, but others such as Kate Hayes stayed on.

“I was working in retail in my home town of Waterford. I had taken some time out from studying veterinary nursing in St John’s college in Cork. When the recession hit, my hours were cut so I decided to travel to Australia to sit out the downturn.”

In August 2011, she and a friend moved to Perth, rather than the more popular Sydney.

“Perth was a huge Irish hub when we arrived. There were so many Irish people arriving every week. Rental properties were really hard to get and wildly expensive. There were queues around the corner and down the street for apartment and house viewings.” At its peak, an estimated 40,000 Irish were living in the city.

Luckily, Hayes had some friends from home in Australia and she got a job. Initially she worked in hospitality, but then decided to try get back into veterinary.

“Finding a veterinary job was hard. I sent out hundreds of applications in 2011 when I arrived, and eventually, in 2012, a clinic called Warwick Veterinary Hospital got in touch, offering shifts.”

I had two jobs in Irish bars plus my job at Warwick Vet. All of this along with college. It wasn’t easy

Australian work visas run out after a year, unless you get sponsored by an employer, but Hayes had met her Irish husband soon after arriving and was able to jump on his five-year sponsorship visa.

It allowed her to complete her studies in veterinary nursing. But it wasn’t easy, because Hayes was working three jobs for two years straight.

“I had two jobs in Irish bars plus my job at Warwick Vet. All of this along with college. It wasn’t easy. But I studied and worked as hard as I could and graduated from Polytechnic West in Bentley as a veterinary nurse in 2014.”

Hayes also volunteered at a native animal rescue centre, and ended up adopting a joey – the name given to kangaroo babies. Her mother had died in a car crash but she was still alive in her pouch.

“I took her home and cared for her, carrying her in a shoulder bag. It was a big commitment. She had to be fed every three to four hours so she went everywhere with me, but she eventually died of a heart condition called cardiomyopathy.”

For Hayes, it was devastating but the encounter led her on to an RTÉ television show called Making it Down Under, which charted the lives of Irish ex-pats in Australia. The show aired in 2016.

Her media career didn’t end there though. “I had an Irish client come into Warwick one day after I did the show and her dog needed surgery and a subsequent cast on his leg. I decided to cheer her up by creating an Irish flag on the cast. After that, it kind of took off.”

Hayes got more adventurous and started making 3D pictures out of bandaging on all the casts of animals who had been to surgery.

“It took a while as I had to cut out the individual pieces, then stick them on. I had done art and painting before, so it was very enjoyable and I got more experimental including characters from movies, Sesame Street or Superman [pup].” She created a social media page of bandage art and Irish media picked up on it.

So again, Hayes’s family and friends could read about her Australian adventures in newspapers and online.

After the five years of sponsorship Hayes and her husband, who married in 2017, went for the permanent residency and, this year, they finally got citizenship.

“It took years of admin, but we got there in the end,” she says. The couple contemplated coming home, but realised that they would have to start all over again.

“I’m from a family of seven brothers and sisters and I’m the only one away from home. But we love Perth. The lifestyle here suits us. We just recently bought a house with a pool, after a long slog and lots of saving.”

This means Hayes has lots of space for animals. She has fostered and rehomed more than 120 cats since 2015 and has numerous rescue pets living at home. “The sun also helps and our weekends are spent at the beach or visiting the local wineries.”

Hayes recently changed careers and is now working as a sales representative for a pet wholesale company in Perth. “It’s a big change from the veterinary industry but I’m enjoying it and I can luckily still take my dog to work with me. I will still do the odd shift at Warwick Veterinary and am involved in animal rescue but I’m enjoying my new choice of career.”

Hayes advises anyone emigrating that Australia is no easy ride. “Some people at home think we live a holiday lifestyle but we work the same and as hard as everyone else. We just happen to live in a sunny, beautiful place.”

She says, not having family around never gets easier. “I long for Ireland when I’m in Perth, but when I go back to Ireland for holidays, I long for Perth. I guess that’s the emigrant’s curse. I’m never completely at home anywhere.”