Kindness in the workplace too often goes unrewarded 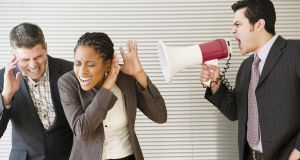 Tomas Chamorro-Premuzic’s Why Do So Many Incompetent Men Become Leaders? – a guide to the overconfident, reckless narcissists who so often end up in charge – has been one of the most popular business books of 2019

The other day a colleague arrived at work looking unusually pleased.

“You wouldn’t believe what just happened to me,” he said, and before I could stop him he had launched into a peculiar story about a suitcase. He had a quite expensive one that he could not use any more because it had lost a wheel. He had found a new wheel on the internet but did not have the tools to attach it. Eventually he found a shop that could do the attaching, if he didn’t mind waiting 20 minutes, so he went off to a nearby pub where he was struck by a ghastly thought: in his excitement at finding the thing could be fixed, he had forgotten to ask how much it would cost.

Braced to be billed a stonking sum, he returned to be told something you do not hear every day in the middle of London: no charge. “Just put whatever you like in there,” said the man at the counter, pointing to a cancer charity box by the till. It turned out the charity had looked after the man’s late father and as a result, customers were often asked to donate instead of paying for smallish jobs, so much so that the box took in about £2,000 (€2,400) a year.

Listening to my colleague gush about that small act of generosity at this time of year reminded me that kindness in business is oddly complicated. We delight in it on a personal level, yet we are unsure it is a good or even necessary quality in the workplace. If we were surer, business psychologist Tomas Chamorro-Premuzic might have struggled to write one of 2019’s most popular business books – Why Do So Many Incompetent Men Become Leaders? – a guide to the overconfident, reckless narcissists who so often end up in charge.

So are we hard-wired to prefer charisma to humility and kindness? Or are we entering an age of rising demands for better business behaviour in which the modest achiever will triumph? The research certainly seems clear: humble, unassuming bosses spur more collaboration which often improves company performance in the long run. Yet I fear that finding an effective version of that leader or manager can be tricky.

Many years ago, I had a job that involved stretches of stressful editing in between periods of intense boredom. To pass the time, my colleagues and I would occasionally resort to gossiping about who was the best-looking person in the office. We found this inordinately diverting but one day, someone suggested we try a new question: if Jesus were working among us, who would that person be?

We looked at each other blank-faced. A few of us made a stab at it and were quickly shouted down until eventually it was agreed there was probably only one person who could plausibly fit the bill. He managed a team of people so considerately that he inspired a lot of loyalty. He listened to his underlings’ gripes and made sure higher-ups knew of their feats. He never lost his temper. He worked as hard as anyone and very often harder.

As it happened, none of this held him back from promotion, nor others of a similar ilk I have worked with since then. Yet it might have, because this sort of behaviour regularly goes unrewarded and in certain circles it is deemed to be something more dire: fatally dull.

I still remember how the writer Sam Leith described the influential British literary agent Deborah Rogers when she died in 2014. “She had the unusual combination of being both very kind and not boring or pious,” he wrote in the Evening Standard. If you were interested in gossip about writers, “she was the one to corner”. I never met Ms Rogers but I recognised what Mr Leith was saying at once. I know kind people and exciting, charismatic people, but few who manage to be both. I do like to think they exist, though.

On the way into work one day last week, I dropped into Alba Luggage, the family business in Marylebone, London that fixed my colleague’s suitcase. Danny Barkany, one of the owners, looked embarrassed when I asked about his non-charging policy. “I don’t think we’re being kind,” he said, adding it did not make sense to charge for jobs that cost almost nothing. “Perhaps I’m a very bad businessman,” he added. “But I don’t care.” Nor should he. Alba Luggage has been going for more than 40 years and if there is any justice, it will go on for 40 more. – Copyright The Financial Times Limited 2019

1 Who are Ireland’s 17 billionaires?
2 My father in a nursing home wants to gift me his house
3 Are there annual limits on inheritances or gifts to a child?
4 State subsidises public sector retirees to cover gap until State pension
5 Swiss police suspect Davos plumbers of being Russian spies
6 Davos Diary: Chilly reception for Trump’s ‘prophets of doom’ speech
7 Avolon executives share €27m in pay as revenues soar
8 O’Flynn company ‘mistakenly’ got go-ahead for Birmingham project
9 Help, I’ve no PRSI stamps – can I still get a pension?
10 Q&A: Why has the pension age question suddenly become an election issue?
Real news has value SUBSCRIBE