The Irish midwife in Marbella preparing for Christmas deliveries 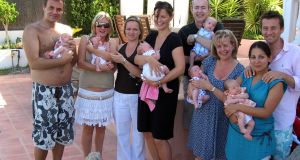 Happy customers: Irish midwife Ann Halpenny is holding Hannah and her husband Denis, fourth from the right, has Patrick

Anne Halpenny trained as a midwife in Dublin, but now lives and works in Marbella in Spain, where she is getting ready for Christmas deliveries.

I went to work abroad in the 1980s, as many did at that time. I worked in Australia, Iraq and also in Riyadh in Saudi Arabia, but the last time I left Ireland was in 1996, and it was for Spain.

I am from Dublin and studied in the Richmond Hospital there, and then completed my midwifery training in London.

Have you done any training anywhere else?

Maintaining my professional midwifery practice includes continuous study and training. I've also been a cardiopulmonary resuscitation (CPR) and First Aid Instructor since 2011. I did this principally to meet the needs of new parents, but it has brought me into international schools, businesses and clubs along the Spanish coast. It is really satisfying to offer this training to teenagers and their teachers and lots of parents.

Midwifery in Marbella - how did that come about?

My husband and I came to Spain for at least three years due to his work, and having resigned from Dublin’s Rotunda Hospital, I decided to register as a midwife in Spain. One cannot be faint hearted to tackle Spanish bureaucracy. About a year later I had my Spanish certificates, had learned Spanish and worked in the maternity unit in Gibraltar. I was then ready and legally entitled to work in Spain.

Do you work in a hospital and what does it involve?

I worked from 1999-2009 in the main public hospital in Marbella, where midwives work in the labour ward. During that time I offered new parents postnatal care at home as this is not available here. I also initiated antenatal preparation classes in English as so many ex-pats did not speak Spanish. After the births of my own son and daughter, I was lucky to be to be able to spend time with them by working independently and optimising my flexibility.

Do you work with many Irish women?

I have met couples of every nationality, including lots of Irish. People contact me when they are planning on having a baby in Spain; they are from Azerbaijan to Africa.

You are known as "The Irish Midwife". How is it being an Irish midwife in Spain?

Well the name evolved as I was the first non-Spaniard to work in the maternity unit. Women heard there was an Irish midwife and slowly the name stuck. I have loved working with Spanish midwives and obstetricians. That said they did also call me Happy Meal as Halpenny was way too difficult for them to pronounce.

Are you expecting a Christmas rush and does Christmas make a difference in your line of work?

No - no rush. Most mums-to-be would love to have had their babies by Christmas Day so there is a lot of wishing and willing babies into the world mid-December. Christmas is less commercialised in Malaga. Babies come regardless of dates and times so the labour ward is always open.

Do you have a predictable day?

No, not really. I spend a lot of my time answering queries and reassuring new parents - both online and by phone. My antenatal courses are always in the evenings and the CPR courses depend on the client's needs.

Who do you work with?

I have worked for many years with another Irish midwife Yvonne Marry, who is originally from Kilkenny, but moved to Spain where she went to school. I also remain in touch with the staff in the hospital here. Antenatal courses are held in a British GP clinic and postnatal groups meet in a children’s centre. I meet a cross section of care providers every week.

Now, there is little difference, at least in the Costa del Sol Hospital. It has the reputation as one of the first and best maternity units in Spain to facilitate the wishes of women in relation to the births of their babies. In some parts in Spain maternity services would be considered more old-fashioned or conservative, as it was when I started in 1999. It was great to be part of those changes.

Do Spanish and Irish approaches to childbirth differ, personally and medically?

It would be unfair to give an accurate opinion as I would be basing it on the recent RTÉ programme The Rotunda rather than on the factual differences. I am here a long time. Obstetricians do have a wider role in antenatal care here than in Ireland or the UK. The Spanish midwives could have more of an impact on women’s lives than they do at present. They are fighting for changes.

Is there a language barrier in hospitals?

Many foreigners do not speak Spanish and a sizeable number of Spanish speak basic English, although this is changing. There are translators in many hospitals to meet the needs of the foreigners.

You give antenatal classes. What else do you do?

I provide a lot of advice on how to access the Spanish health system and highlight the significant differences with other countries. I also offer antenatal visits and postnatal home care, and then there is the CPR/First Aid training.

What are the challenges facing midwives in Spain?

There is a lack of sufficient posts, which means midwives are unable to use all their professional skills and, of course, the relatively low pay.

Have you any advice for any nurses interested in working in Spain?

Do your homework - know the job opportunities in the region (not great at present in much of the country). Understand the paperwork in order to register in your local College of Nurses and therefore you are insured to work legally. Learn Spanish and come with an open mind.

Yes, Irish people are recognised as very friendly and open, and many Spanish call us the Mediterranean of the North.

Yes. My own children are generously trained every week by the senior Costa Gaels GAA team. Many Irish couples I have cared for often stay in touch with me.

It is sunny, international, with a slower pace of life here and a great environment to raise young children in. We still try to escape when the tourists arrive and it is too hot.

How do the costs of living in Spain compare to Ireland?

Marbella is probably one of the most expensive places to live in Spain. Go a few kilometres inland and the price of everything falls. But local fresh fish, fruit and vegetables are still cheaper than in Dublin. A coffee is €1.50 - the same price as a small beer - if you stay away from the tourist haunts.

In spite of being only a three hour flight away, at times, we miss old friends and our families. There is a degree of transiency here - people come and then they go. Also, I miss the four defined seasons as opposed to summer-winter-summer that we have here.

What will you do for Christmas?

We will be going to Ireland. We will be with family although there’ll be an empty place at our table this year, as my dad recently passed away.