Irish teacher in Geneva: 'At times Switzerland reminds me of Ireland a lot'

Carlow native Michael Doyle on life working in Spain, Oman and Bahrain: ‘Our qualifications are respected all over and our accent is welcome everywhere’ 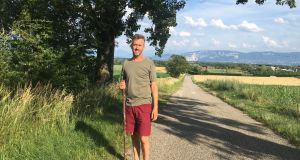 Michael Doyle, pictured in the French Jura just outside Geneva, is originally from St Mullins, Co Carlow. He lives in Geneva, where he works as a maths teacher in an international school.

Working Abroad Q&A: This week Michael Doyle, who is originally from St Mullins, Co Carlow, and now lives in Geneva, on working as a maths teacher in an international school in Switzerland. He teaches 11 to 18 year olds, many of whose parents work for UN organisations around Geneva. The school is bilingual, and staff and students express themselves in French or English with no translation expected. Doyle understands everything, but says he will “avoid answering in French in public to hide my Irish accent, which seems to persist in whatever language I try to speak”.

“Would the last person to leave the country please turn off the lights” was the common joke when I graduated from Maynooth with a science degree and Higher Diploma in Education in 1987. Growing up in St Mullins, Co Carlow, I had never thought of emigrating, but like many others I headed to London and started teaching in Kent always thinking I would return to Ireland in a few years. Here I am 32 years later teaching maths at a huge international school in Geneva having worked in Spain, Oman and Bahrain in the interim period, picking up a wife and three kids born in different countries along the way.

Tell us about your work in Switzerland?

Working in international schools is always very interesting and they do not come any more international than Geneva. Not only are the classes a mix of nationalities and languages, but the students themselves often have parents of different nationalities who, like my own children, have grown up in this environment speaking French and English as well as their own home languages. I have many Irish students who can be spotted by their obvious colouring or maybe because they are wearing a Leinster rugby jersey. The ethos of the school is that staff and students can express themselves in French or English, and we are expected to at least understand both. I understand really well and am quite fluent, but there is no shaking my Irish accent even after 12 years here.

Is being Irish useful to you as a teacher?

I find that being Irish has been a help teaching internationally. I think I am seen as more neutral in terms of education as most seem driven by a British or US model. In more politicised environments, such as the Middle East, I believe it also made me more approachable to people. I would recommend it to any Irish teacher with an interest in travel and getting to know new cultures. Our qualifications are respected all over and our accent is welcome everywhere that I have been. It’s also useful to use Irish Leaving Certificate questions when my students have searched all over for possible exam questions that I might pose.

What took you to Geneva to teach?

The buzz of moving to a new country was always great for my French wife and I. We had wanted to work in Geneva for years because of the reputation of the school. The International Baccalaureate was started in this school and Switzerland had a great reputation for quality of life. As our own children got older, they also wanted more stability and to put down some roots, so Geneva has been perfect for this. It has not meant they lost their Irish roots as two are currently studying in Trinity College Dublin and one is now working in central Dublin having graduated from UCD. Two flights per day from here to Dublin really keep links open with Ireland.

There are many things I like about Switzerland, but the extreme seasons must be number one. I cycle to work in the summer and often wake up in the winter to heavy snow. However, unlike Ireland, the roads have been cleared already and the school has never closed because of snow in its 90-year history. There is great skiing between the Alps and Jura in winter. Our village has a small ski resort and it was our back yard while the kids were growing up with skiing every weekend and during the holidays. Summers are very hot when life switches to days by outdoor pools and the beautiful Lake Geneva. There is a real outdoor lifestyle. I also love that Geneva is situated so centrally and we can be in France, Italy or Germany in a couple of hours or less.

Is pay good in Switzerland?

The salaries are high in Switzerland, but so is the cost of living and you can feel like you’re being mugged at times when you go shopping. It is very easy to spend money here - my teenage daughter is particularly skilled at this.

Do your children feel Irish?

With an Irish dad and French mother our children feel half Irish - half French, which is obvious when sports teams are playing. Swiss would come third. The two younger children, Anaïs and Marc (aged 19 and 21) spent longer in Geneva and feel more attached to the area, the oldest one, Kevin, who is now 24, feels more attached to Dublin having studied there at UCD and is now working there.

The Irish fit in well here, especially if they try to learn the language. There are quite a few Irish teachers at the school and this number has actually grown in recent years with people changing passports because of Brexit. I think we are well suited to working in such an international environment. I meet many Irish socially and especially through sport.

Switzerland reminds you a bit of Ireland, why and would you ever go back?

Switzerland is a secure, beautiful and pleasant country to live in. At times it reminds me of Ireland a lot, especially in the spring and autumn with the Geneva mist and rolling countryside. I miss my Irish family, the GAA, parish life and walking in to a pub or church and knowing everyone. I miss long extended chats over endless cups of tea. It is so much easier now, however, to keep in touch with home and this has made life abroad so much easier for everyone. It is also effortless now keeping up with Irish news. I may go back to Ireland one day, but it will probably be to retire at this stage as I am really enjoying life in my adopted country.