Dubliner Eric Porter on life as an aerospace engineer, Brexit, and the one thing that unites all British voters 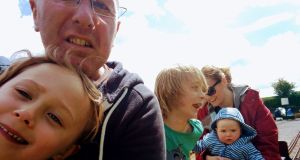 Working Abroad Q&A: Eric Porter, who is originally from Dublin, now lives in Bristol, where he works as an aerospace engineer.

I suppose technically I left the Republic of Ireland in 1993 when I went to Belfast to study aeronautical engineering. After four years there, I spent a little time at home working temporary jobs at Dublin Airport, not totally unrelated to my degree, to save money so I could travel.

I studied in Queen’s University Belfast for a degree in aeronautical engineering, and later went on to complete an MSc in Aerospace Vehicle Design in Cranfield in Bedfordshire in the UK. I loved my time in Belfast and made lifelong friends there. I also worked for two years at Boeing in Seattle, which gave me a lot of on-the-job training.

Tell us about working in the aerospace industry in Bristol.

The aerospace industry is a major employer in the Bristol area. I started work at a relatively exciting time as there were opportunities to work on brand new aircraft projects such as the A380 Super-Jumbo. There was a real sense of excitement at that time, a feeling that we were at the cutting edge. Now there are fewer new projects to work on and there aren’t the opportunities there once were. But gaining experience in the relative boom-time has served me well and put me in a reasonably good position today.

How has the Brexit vote affected you?

With my main source of work being Airbus projects, there is a large amount of uncertainty with regard to the Brexit situation. Airbus have been clear since before the referendum they believed Brexit to be a bad thing, given that the multinational nature of the company requires free movement of goods, services and people. There have been strong words from the (now retired) Airbus chief executive making clear that the company would have to re-evaluate its investment in the UK if no favourable trade agreements can be negotiated.

Bristol as a city and the southwest of England as a region have a long history of aerospace design and manufacture. From the early days of the Bristol Aeroplane company to later European collaborations - the Concorde was developed and built here - there have been organisations such such as Airbus and Rolls-Royce, plus dozens of smaller, organisations based here. As such, any threat to the employment of thousands directly, and thousands more indirectly, would be a catastrophe.

Your partner is Scottish, so the Brexit chats must be intense...

We both have a similar political outlook and are genuinely puzzled as to why anyone would have voted for Brexit. But in work and out in the pub, Brexit is fast becoming a taboo subject as it causes arguments and, frankly, most people are suffering from some sort of Brexit fatigue.

I currently provide my services as a contractor to a company called Sitec, who are a major supplier to the aerospace industry. I am a Senior Stress Engineer working on, among other things, the in-service repair of Airbus Aircraft, dealing with damaged wing structure and helping to design and certify suitable repairs. The repairs can range from minor corrosion to major impact damages. Day to day, my job involves the checking and approving of complex calculations to ensure the safe operation of the Airbus fleet.

We often work to short turn-around times as the operators (airlines) are always keen to get their aircraft back into service as soon as possible. Every day an aircraft is on the ground it costs the airline a lot of money.

There are aircraft maintenance bases in Dublin and Shannon, which would provide some opportunity; however, they wouldn’t perhaps go to the technical depth that my current job entails.

Would you go anywhere else?

It is difficult with kids mostly settled in school. I think any move would either be to Dublin or Scotland as the one thing we have missed out on with the kids is the support of family close by. A lot of friends here have grandparents living close and available to help at a moment’s notice. I think that’s one thing we both feel we would have appreciated greatly. Professionally, the south of France would be a good option with Airbus headquarters there, but that would put us even further from family and it would be a big leap for the kids.

Bristol is a great city with a very cool, laidback vibe. In terms of social life, there is a lot of choice from the cool, bohemian neighbourhoods of Southville and Gloucester Road to the more upmarket areas such as Clifton. In the summer a lot of summer festivals are close by (Glastonbury is only about 40 minutes away and the city seems to empty when it is on). There are lots of green spaces dotted around and we’re never too far from a nice place to camp (south Wales and the Devon/Cornwall coast are quite close). It is a very family-friendly place with plenty to do around the historic harbourside.

What advice would you give to someone interested in working abroad?

I’m a big advocate of travelling and seeing new places, so my advice would be just do it. If it doesn’t work out, Ireland will still be here and you’ll have broadened your horizons in the meantime.

There are few, but generally our friends here are English. A friend from uni moved over in 2003 and we flat-shared for a while. He called Bristol “England’s best kept secret”.

Compared to Dublin and London, Bristol is reasonable, but as with everywhere house prices have skyrocketed in recent years. A night out is certainly cheaper than Dublin, but at the moment a visit home can be costly as the value of sterling versus the euro has plummeted in the wake of Brexit uncertainty.

Do your three children consider themselves Irish?

They have Irish passports, but they would call themselves English.

Is the NHS important to you?

The NHS is the most amazing institution and seems to be the one thing that unites the voting public here. Having had three children and experienced firsthand the level of support available free of charge with no private health insurance required, I have been astounded. The professionalism and level of care from NHS staff has been mindblowing given the sometimes terrible conditions they work under and the seemingly constant attack from successive governments.

My friends and family. We get back a few times a year and I usually get to go out for a few pints with old friends. It would be good to meet up them more often.