‘All that Scandi Noir does not come from nowhere’ 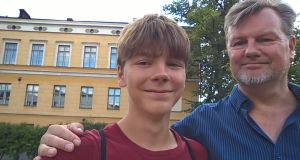 Brendan Humphreys and his son Kolia in Helsinki

Working Abroad Q&A: Brendan Humphreys,  originally from Coolock in Dublin,  now lives in Helsinki, where he is a researcher and lecturer in Russian and East European studies in the Aleksanteri Institute at the University of Helsinki.

I left in 1990. I was working in Dublin’s animation industry, but was nonetheless happy to move to Finland. My family had visited Denmark and Sweden when I was in my teens, and I always liked the Nordics, so it was an easy decision. My work history here looks colourful; construction, hotel waiter, barman, language specialist, then academic. This is not to ignore the gaps and related insecurity, which should not be minimised.

Where have you studied and worked?

Workwise, I have been a researcher in the Aleksanteri Institute specialising in Russian and East European studies for a decade now. I have focused on the ex-Yugoslavia, a country with a fascinating if, at times, horrifying, history. I worked in Belgrade and have been a visiting lecturer in Sarajevo. They are two really interesting cities.

This is a very kid-friendly city; Finnish education is very good, there are lots of amenities, a low crime rate

My other research interests include the Cold War, the post-1989 transition, urban studies, and the sociology of conflict. I am currently co-editing a study of Russian modernisation and writing a book on how nationalism operated in communist regimes that denied they were nationalist.

Do you go to the ex-Soviet Union much?

I first visited Russia in 1992 and spent quite an amount of time there. The USSR was still disintegrating and life was very harsh for people, yet fascinating to observe. I actually did some journalism then. I also visited Uzbekistan, which was just becoming independent, and Estonia. Tartu, the second largest city in Estonia has a very old university, but it because a “closed” city due to its Soviet airbase. It is now a vibrant university town again and even has a statue of Oscar Wilde!

Has Russia changed since you first went?

I was most recently in St Petersburg at Easter. It has changed so much and now has an evident middle class, developed infrastructures, booming café and restaurant life. The contrast with the early 1990s is huge. There were few consumer goods then, and some could only be bought with foreign currency, which few people had. In effect there was financial apartheid. People would sell items on streets just to get the fare to work. Then the huge streets had little traffic - that has certainly changed, as has much else.

Do you speak languages other than English and Irish?

(Thanks for the Irish!) I speak Finnish and French, functionally rather than fluently. I learned Serbian for my research work, and am currently upgrading my Russian, plus starting Romanian for a project. Like the late Paddy Ashdown, I’m always learning something (Arabic got left on the cutting room floor - I loved the calligraphy), but I cannot claim to master anything.

What is it like bringing up your son in Helsinki?

My son Kolia is 13. French Mom, Irish Dad, born in Finland, and with a Russian name (Kolya/Kolia being diminutive for Nikolai). This is a very kid-friendly city; Finnish education is very good, there are lots of amenities, a low crime rate, a general ease of life. Kolia plays basketball, likes skateboarding and graffiti writing - there are facilities for all three activities around the city.

Helsinki is a very attractive city, although one must be stoic about the dark winters. It is green, well laid out - Finns are natural designers, engineers, architects - with a very civic, inclusive feel. The new city library, Oodi, is a real shared public space, there are even sewing machines among the bookshelves and computers. There is a lively cultural scene, including free concerts, and days when museums are free.

It’s also a waterfront city - one is never far from coastline. I live very close to the sea, my favourite swimming spot is an island, 15 minutes by foot, five by bike. With a low population, it’s a nicely-scaled city, with great public transport - I don’t have a driving licence. On the flip side, there is solitude and alienation here too - all that Scandi Noir does not come from nowhere.

You are a bit of a rugby fan. Does anyone there know what it is?

I got interested and involved in rugby 20 years ago, when I was a barman. While working, I saw most of the 1999 world cup, and some guys (and gals) were starting a Helsinki club. The game was then quite unknown in Finland, but it has since really developed - perhaps it speaks to the stubborn (sisu) temperament? There is now a national league and national team, but it will never have the profile of ice hockey, or other winter sports. For obvious climactic reasons, rugby here is a summer sport. By a nice convergence of interests, I have a contract with Bloomsbury to write a history of rugby in communist Romania. Their teams were largely army- and police-based, and this had dramatic consequences during the 1989 revolution.

Yes, a few. A close friend is a Dundalk-born actor, Frank Boyle. We have done literary readings and pub theatre together for over 25 years. In Russia we did a Joyce reading in Nabokov’s sitting room (now a museum), with the piano, books, and butterflies. Performing one great novelist in the home of another; a memorable evening.

Does your son consider himself Irish?

Not especially. He is aware of being half-Irish, but the question of a single ‘national identity’ amuses him, he can’t see the need for any one label and is pretty comfortable with his tri-cultural self. His DNA test threw up a very rich pattern of origin, from Celtic countries to the Balkans, with a strong dose of Italian (via Corsica).

One gets asked this a lot; it seems one is expected to miss Ireland? At a sentimental level I do sometimes, but I have spent most of my adult life in Finland, and sad to say, I have loved ones buried here, which really deepens a relationship with an adopted country. That said, it is still grand to get ‘back’, see my siblings and relatives. The attractive aspects of Ireland for me, are the usual suspects; the humour, and the verbal energy. A contrast to the reticence and quietude here, but one can balance both.

Irishman in Philadelphia: Mass protests across the US felt inevitable
2

239 experts with one big claim: Coronavirus is airborne
3