‘Nothing is wasted’: chef Robin Gill goes for sustainability over style

Wild Geese: The Dublin-born chef is bringing the Italian way of cooking to London 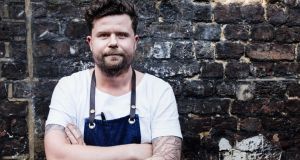 Robin Gill: “It was 1999 and, if you wanted to progress in the business, the thing to do was go to London and get your ass kicked”

Robin Gill grew up in Sandycove, Dublin, but it is in London that he made his name.

Gill owns four restaurants in the city – the Dairy, the Manor, Paradise Garage and Counter Culture – and has established a reputation for the quality of his food, his innovative dishes, the atmosphere in his restaurants and his commitment to sustainability.

Following a brief career in Dublin, and training on the Continent – at La Stampa, QB2 and Restaurant La Mara – Gill decided to move to London.

“Two of my best friends were going to London and I didn’t want to be left behind, so I followed them over. This was 1999 and, if you wanted to progress in the business, the thing to do was go to London and get your ass kicked.

“I went there with a Michelin guide and some cover letters. I took a Tube around London and went to restaurants that had a Michelin star. The last restaurant I went to was The Oak Room, Marco Pierre White’s restaurant. It was the one I least expected to get into but they offered me a job,” says Gill.

His confidence grew in the three-star Michelin kitchen but, when he decided to leave, he went for a completely different style of Michelin cooking.

We were like a family in the kitchen: 14 cooks, working six days, 90 hours a week. I vowed I’d never go back to Michelin kitchens again

“I stayed with Marco for a year and a half, and it was a huge learning curve. We were like a family in the kitchen: 14 cooks, working six days, 90 hours a week. I vowed I’d never go back to Michelin kitchens again,” he says. However, Gill ended up in a one-star restaurant, Don Alfonso, on the Amalfi coast in Italy.

“I followed the same friends again. Don Alfonso is a family-run restaurant, there since 1890.They had their own farm, bee hives, etc, and it had a massive impact on me, for the cooking and the produce. There had been no seasonality in London – it’s all about all about technique and skill – but in Italy, it’s very simple cooking but use of the produce as it came into season is the skill.

“I wanted The Dairy, my first restaurant, to be a farm-to-table experience because of the influence working in Italy had on me. I took my time, though. I worked for another 12 years before I took the plunge myself.”

Running a restaurant is not just about the passion of the food – it is also about running a business – and Gill got this balance right from the start. His commitment to the produce he uses and his passion for sustainability prompted him to get involved with innovative projects and producers.

“We like to deal with people directly. We get our fish to the restaurant five hours after it gets to shore. We buy our animals whole and we use every part. It costs less because I am cutting out the middlemen.

“We built a production kitchen and we invested in refrigeration so we can age and store our meat, and we have a cellar where we make our own charcuterie, so nothing is wasted. We make our own fermented foods and we have beehives on our roof. We are sustainable for five months of the year with salads and herbs.

“Our head chef from the Manor has sourced a piece of wasteland nearby. He’s turned it into his own garden and we’re working with the council now, teaching local kids how to grow food.”

Gill’s re-use of his restaurants’ waste really illustrates the innovative sustainability of his projects.

“We work with a scientist who puts live bacteria enzymes at the bottom of our food bins,” he says. “It’s all natural, and he brings it to farms in Sussex and the food decomposes there. We are now leasing land from those farmers and we’ll grow all our own food, nourishing the soil from our food waste, including fish bones, eggshells, everything. Eventually we’ll start planting apple trees, plum trees, etc, and we’ll be completely self-sustaining. It is my dream to be working this way.”

If any validation were needed for Gill’s skills as a chef, and his commitment to sustainability, it surely came when he was asked to be a partner in the biggest hotel opening in the UK.

“It’s the Great Scotland Yard Hotel and it’s in the old Scotland Yard building,” he says. “It’s a £110 million refurbishment, and I’m looking after the restaurant, tearoom and two whiskey bars. The hotel is boutique – 100 rooms, just off Trafalgar Square – and I’ve just signed the contract. It’ll open in June 2018.

“It’s huge validation for me. I get to work using the same ethos, sustainability methods, but bring everything I do to another level.”