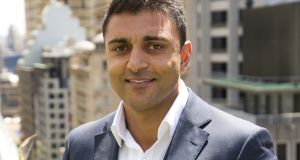 Imran Masood from Castleknock in Dublin moved to Sydney, Australia, where he works with digital advertising company Sizmek: “If the opportunity arises you need to take it. If you deliberate on a decision, you can lose that opportunity.”

With a name that doesn’t quite match the traditional expectations associated with his accent, Imran Masood often gets asked about his background. “It happened just last night,” he says. “A client of ours said when she first saw my name, she wondered if I was Pakistani. Then she met me and was like ‘Wait there one second, what’s going on here? What accent is that?’ And I said ‘I’m Irish’, it happens all the time.

Masood, who is from Castleknock in Dublin, left Ireland out of necessity. Not necessity of economic circumstances, but the necessity of wanting to learn more, do more and expand his knowledge and horizons.

Born in the Coombe hospital to a Pakistani father and an English mother of Pakistani background, Masood has a surprising reply when asked if he was named after legendary cricketer Imran Khan. It turns out Masood’s father Alf won 40 cricket caps for Ireland in the 1980s and is a close friend of Khan’s, and the latter would regularly fly to Dublin between Test matches in England, where a home-cooked curry was always waiting for him.

After graduating from a television production course in Ballyfermot college, Masood spent a year in Sydney on a working-holiday visa. The experience left a mark on him that would draw him back six years later.

Back in Dublin in 2003, he started to work in TV production. “I was really enjoying doing camera work, but that side of the business is contractual, and I wanted some stability in my life. I like to plan things and to have a little bit of control or direction. So I ended up moving from production to advertising, selling spots on TV.”

He moved to London in 2007 when a job at the same company, Viacom, became available.

“I wanted experience with the business in other markets. If there is something you’re really passionate about, or you feel like you really need to do, if the opportunity arises you need to take it. If you deliberate on a decision, you can lose that opportunity. If I didn’t take the opportunities I’ve been given in the last 15 years, I probably wouldn’t be here, married to my wife and with a baby boy.”

After two years in London, Masood made his way back to Sydney, only to discover that Australian companies are reluctant to hire late in the year as the country winds down for the Christmas/summer break.

With his money running low and few replies to pitches for work, he finally got a job a couple of days before Christmas 2009 with television station Channel Ten. “I was then able to go into the new year with the assurance that I could get my life going here.”

With his foot in the door in a country where the per capita advertising spend is one of the highest in the world, Masood was on a path to where he is now, country manager for Australia and New Zealand with digital advertising company Sizmek.

“What I was really passionate about was investment and trading and understanding how businesses make money, not just closing a deal and hitting targets,” he says.

Masood is confident of a very strong future for digital advertising. “We’re at a space right now where the technology is there to be able to offer advertising as a service, not as something consumers want to block. If we understand what you do and what you’re interested in, and we put up something relevant to you, it’s going to add value to your day. You might click on it, you might purchase something, you might engage with it, and it’s not an interruption in your day, it’s a service. That’s where the industry is trying to get to.”

The business culture in the advertising industry is not that different in Australia to Ireland or the UK, Masood says.

“There are a huge amount of expats in the industry, so you speak to so many Irish and English and Americans every day. It allows for a lot of banter and it’s a fun place to work.”

Masood is concerned about the effect Donald Trump is having on the US, though it has not personally affected him. “My full name is Mohammad Imran Masood, but everybody knows me by Imran, that’s what I’ve always been called since I was born. I was in the US last month for a conference and there was no problem. But I am conscious of it when I land in the US. Trump isn’t building a great reputation for how he wants America to view other cultures, other religions or any sort of diversity.

“For me, it’s upsetting, because, whenever I go to the US, I have a great time. I’ve only had positive experiences. If they don’t want to let me in, then fine, I’ll go home . . . I don’t want to go there if they don’t want me there, I’d rather be in Australia or Ireland. I don’t think what Trump is doing is positive for his country or his society.”

The name Masood means fortunate, prosperous or happy. In Sydney, with a young family, a successful career and Barry’s tea in the kitchen at home and at work, Castleknock’s Imran Masood is living up to his name.