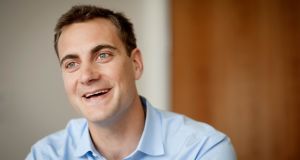 Paul Morrissey: “Software is rapidly changing how we interact with every aspect of the world around us...This trend will only continue, so I’ve found it an incredibly exciting place to build a career”

Dublin-born Paul Morrissey was recently chosen by Forbes magazine as one of its “30 Under-30” young executives and entrepreneurs with promising futures. Morrissey made the list in the European finance category because of his impressive investing skills. Since joining the technology-focused investment company Battery Ventures in 2012, Morrissey has been responsible for investing over $120 million (€114m) in rising stars such as Gainsight, Intacct, Nitro, PrimeRevenue and WebPT.

Morrissey (29) is a London-based vice-president with Battery, and prior to moving to the UK last year to set up new offices for the company he had helped to manage a number of the firm’s late-stage software deals on the US West Coast.

Morrissey was educated at Gonzaga College, and played tennis for Ireland as a junior. This skill landed him a sports scholarship to Stanford University. He left home directly after his Leaving Cert and studied economics at Stanford while representing the university at tennis.

“It was a unique academic and athletic opportunity so I jumped on it,” Morrissey says. “Landing there as a teenager was a phenomenal experience and very challenging, but in a good way. Being at Stanford opened my eyes to a set of opportunities that I wasn’t even aware were available to young people and eventually led to various finance internships while I was there.”

Morrissey joined the technology investment banking team at Goldman Sachs in San Francisco as a young graduate, and has taken a particular interest in the software sector since.

“While we may not think about it, software is rapidly changing how we interact with every aspect of the world around us; online shopping, booking and reviewing restaurants or travel, online banking, the list goes on. This trend will only continue, so I’ve found it an incredibly exciting place to build a career.”

Asked about investments in Irish software companies, Morrissey admits Battery has looked but not bitten. “We have certainly considered a number of possibilities, and I’d love the excuse to get home on a regular basis to work with these companies. Hopefully we can find an Irish company to work with in the near future.”

Morrissey spent 10 years in Silicon Valley, and is now almost a year in the UK.

“This has resulted in a more robust capital environment where entrepreneurs can be formulaic about starting companies, growing companies, failing quickly and starting again. For me personally, the big benefit was learning to succeed in such a dynamic work culture, and, of course, the opportunity to explore the Californian coastline.

“What I like about living in London is that it’s an opportunity to explore one of the world’s great cities. I’m enjoying experiencing the fusion of cultures and, of course, being so close to home.

“Right now I am enjoying where I am. A large portion of my time is spent talking to passionate entrepreneurs who have built incredible businesses. Constantly learning from their success, experience, and industry knowledge is both a privilege and an intellectual challenge.”

Morrissey’s advice for those contemplating their college or career choices is to hook into the technology boom.

“Technology by definition is growth. We are seeing it dominate every facet of our lives and every industry around the globe. In the late 1980s, technology and healthcare took up just 15 per cent of the earnings of the Standard & Poor’s [stock market index]. Today this has grown to about 43 per cent, and this trend will only continue as we find ways to use our limited resources more efficiently.

“I’ve chosen to build my career in this rising tide that defines our age. With the strength of an Irish education, English as a first language and the presence of so many leading tech firms in Ireland, there is huge opportunity for Ireland’s youth to break into the technology industry both at home and abroad.”