‘If you’ll excuse the pun, I believe I’ve ‘cemented’ my career’ 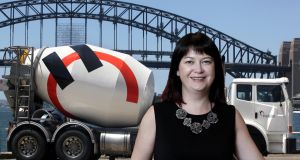 “If you’ll excuse the pun, I believe I’ve ‘cemented’ my career by moving against the tide,” says Aiveen Kearney speaking from Chatswood, New South Wales in Australia where she is chief financial officer of Holcim Australia/ New Zealand, a subsidiary of LafargeHolcim, the largest building materials company in the world.

“In the early days back home, I picked the ‘difficult’ roles , not because there was some master career plan but because I thrive under pressure: I love a challenge.”

This love of a challenge, a dedication to hard work and being something of an adrenalin junkie led to what she calls “an experience base outside the norm”.

In 2002, Kearney graduated with a certificate in business studies from DIT and went on to study at night at Dublin Business School. “When most of my peers were partying and enjoying college life, I was working while studying at night,” she says.

Starting her career as a financial accountant at Pratt and Whitney, Kearney went on to work as accounting team lead at Informix in Dublin, an American multinational which was later acquired by IBM. From there, she went on to work at Ebeon as finance manager supporting the company’s global expansion. Then she moved to Lidl, where she was chief financial officer during the early days of the company’s presence in Ireland from 2001 to 2003.

In 2003, Kearney decided that she was taking life too seriously and she and her husband Keith decided to move to Australia. They’ve been there since, aside from a three-and-a-half year stint in Boston.

“My husband and I decided to take a year out in Australia,” says Kearney. “Most of my peers had done this in their early twenties and here I was, aged 30, embarking on the same thing.”

Kearney credits her husband, who she met at 17, for supporting the family through the “multiple international moves, the long hours, significant travel and intense pressure” required by her various roles and for pulling her back to “what matters most in life” when her work caused her, as she puts it, to lose perspective.

The couple’s two children, Cillian (9) and Aoife (5), who were both born in Brisbane, have lived in Boston and are now in Sydney. “Cillian sees himself as Australian, while Aoife has a wicked Boston accent and sees herself as American,” says Kearney.

“ It’s easy for the Irish to fit into the Australian lifestyle as it’s culturally similar – it’s sociable, they value family and they have a sense of fun. The weather is a fantastic bonus as it lends itself to an outdoor, healthy lifestyle and I would say the work-life balance here is the best I have seen,” says Kearney.

“I joined Holcim in 2004 through Cement Australia (which is owned 50/ 50 by Holcim and Heidelberg). I had three job offers at the time and this one was significantly lower in salary than the others. It is also a traditionally male industry and perhaps not as ‘female’ friendly’ as some of the other choices. But I chose it anyway because the role was challenging and because they were global and I could see infinite possibilities for progression.”

She is responsible for finance, strategy and procurement. The company’s local operations have 1.8 billion Australian dollars in revenues and employ 2,500 people. They operate 60 quarries, 175 concrete plants and 12 concrete product manufacturing facilities.

In early 2012, Kearney took a promotion which brought her to the US as finance director of Holcim (US) Inc.

“I remember the US CEO at the time asking: ‘Why would someone like you want to come here?’ He was observing that the US was still at the bottom of the cycle while Australia was doing well. He was unsure if it was a clever career choice. But I could see the potential of the upswing and wanted to be part of that.”

After three and a half years there, Kearney decided to return to Australia to take up her current role in Sydney.

“The US economic recovery had started and, to be frank, I was bored. You can always add value as a CFO – always. But it simply was no longer challenging enough,” she says.

Adrenaline junkie? “Maybe. The Australian economy has been hard hit in recent years by the downturn in mining and resources and for someone who was ‘forged in the fire’, the challenges that brings are very appealing.”

Kearney says that she is unsure what the future may bring.

“Who knows? My family and I have loved every minute of our adventures but Keith and I would like our children to have a sense of home or heritage or belonging and feel an obligation to provide that. Global companies require mobility at the executive level and typically would look to move candidates within three to five years. The challenge is how to balance the two.”

She says that as her son approaches secondary-school age, she would like to offer him stability and therefore hopes that her next move leads her closer to home. “But,” she says. “If I have learned anything by now, it’s that you never see what’s coming next.”