‘Even though there are 7.5 million people here, it feels like a village’ 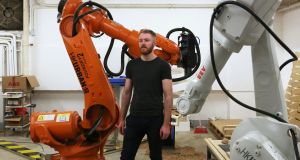 Irish designer and architect Donn Holohan, who lives and works in Hong Kong

Irish designer and architect Donn Holohan lives and works in Hong Kong with his partner Elspeth Lee. Working at the University of Hong Kong while running his architecture practice Superposition with Lee means his working life is varied, his schedule hectic and his spare time greatly valued.

Born in Dublin, Holohan lived in London before settling in Mayo as a teenager where he went to school at Banada Abbey in Sligo and Ballyhaunis Community School. He went on to obtain a BSc in furniture design and manufacturing at GMIT before studying for a BSc and later a masters in architecture at UCD.

He says he had a passion for travel from an early age.

“I always had an ambition to travel and to experience other cultures. Moving to Hong Kong was a considered move and has been a really positive move for myself and Elspeth. I don’t think we really realised how small Ireland is and how vast China is and the amount of work that is happening here. It’s pretty phenomenal.”

Holohan has been living in Hong Kong for almost three years. In their architecture practice, he says that Lee and he are considering how they can fit into the transition of China from traditionally rural to urban.

“China intends to rehouse something like 250 million people and move them from rural to urban areas and [they] are building one city the size of Chicago every year for the next 10 years, so it gives you an idea of the scale of the problem but also of the opportunity to work there,” he says.

“The impact on the global environment is huge and how they are making the buildings is totally different to the sustainable way they made buildings in the past, so we are looking at how we can investigate the material and the local aspect of making and reinvigorate the crafts and trades which are dying using this new wave of technology that we have.”

As well as running his practice, with projects underway in both China and Ireland, Holohan works at the University of Hong Kong where he teaches architecture and is the fabrication laboratories manager.

“I am heavily focused on giving the students the technical skills to realise their ideas later on. I also work in the fabrication laboratories looking at how we can integrate new technology into practice,” he says.

In his Superposition architecture firm, Holohan is examining ways of delivering projects through community collaboration or alternative ways of tendering and procurement.

Work is king in Hong Kong, says Holohan and it’s a case of a six-day week with early starts and late nights, leaving little time for joining clubs or societies. “The time doesn’t exist,” he says.

“When we have downtime, we like to get to the beach or the mountains, or get on a plane and visit somewhere else. The work is so varied that it can be hard to commit to something that happens every week.”

He advises those considering Hong Kong as a place to live and work to visit it first.

“My experience is that it seems to evoke an immediate response from people. They either love it or hate it. If you decide you like it then I would say jump right in – it has a lot to offer both in itself and also in terms of being a gateway to the whole region. You can take a two-hour flight to Cambodia or Vietnam, so it’s an incredible place to be.

“It is also very, very expensive so you have to figure out if it is worth your while financially.”

As an architect he says it’s an exciting place to be.

“The secret to practising in Hong Kong is to look at its relationship to the wider region. The speed at which things are done is very quick compared to home and there’s a lot of responsibility and work involved in that.”

The intense workload and the fast pace of life means one has to be careful to find a balance between work and relaxation. “There is an energy to it which is not really present in Dublin,” he says. He has found Hong Kong to be a place of dichotomies – the division between rich and poor, the intersection of modernity and tradition.

“Everyone is totally plugged in here. When Pokémon GO was released, there was chaos. People were getting trapped between the trains and the platform and walking into doors. People are very connected – it’s a strange mix of old and new. You can’t even compare how high-tech it is to Ireland and yet there is simultaneously this traditional Chinese side of life – religious offerings being burnt on the street, fish or meat stalls on the street where people are cutting up carcasses.”

Despite, or perhaps because of these contrasts, Holohan finds it a fascinating place and returns home rarely.

“Hong Kong is an incredible city. Unless you’ve been here it is hard to describe how dense it is. Even though there are 7.5 million people here, it feels like a village. You can still walk down the road here and bump into someone you know.”