Playing in the big league of US university sports 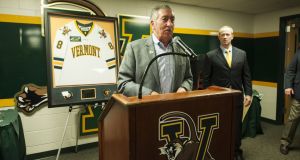 Bob Corran, who retired recently after a successful career as athletics director at the University of Vermont, emigrated with his parents, brother and sister from Comber, Co Antrim, in 1955. He was seven at the time the settled in Hamilton, Ontario, Canada.

Only last year, he made his first trip back to Ireland, as part of an athletics promotion project he is involved with.

“It was a great trip. I visited some of the places where I grew up, including the house I grew up in and the school I went to,” he says. “The amazing thing for me is that they are exactly as I remember them.”

The visit clearly struck a chord. “Just yesterday I was filling out the application for my Irish passport,” he says when I call to talk to him.

“I did develop an interest in the management of sports and I went on to do a master’s degree and a PhD in athletics and sports management, so that brought me to college sports level.

“I became a professor in the University of Windsor in the faculty of kinetics, but I was also coaching ice hockey at the time,” Corran says. “So, while I was teaching the theory of sports management, I remained connected to the practice through coaching hockey.”

However, he found himself at a career crossroads when he was offered an opportunity to go to the University of Calgary as the director of athletics.

“I had to decide if I wanted to move into administration and away from coaching. You can’t do both. What made the opportunity so attractive to me was that year Calgary was a partner university in hosting the Winter Olympic games. That was 1988 and it was a great experience, which then led me into other fantastic opportunities including becoming involved in the International University Sports Federation”, says Corran.

“University sports in the US is big business. It’s completely different than in other parts of the world,” he says. “Of the $20 million budget I was responsible for, one-third came from student fees and the rest was generated by the department from ticket sales and media contracts for coverage of athletic events.”

In very large colleges – for example, Ohio State or Michigan State – Corran notes, sports departments might actually make a profit each year because they not only have enormous budgets but stadiums that can hold up to 100,000 people and they can get huge TV contracts for their sports events.

“The system is tough on smaller colleges, though; they may end up actually losing money.

“Part of my role as director of athletics was to secure resources, allocate resources and set policies and programmes but also to manage our sponsorships. We sponsored 19 varsity sports. These are sports that involve a lot of regulation There is a lot of criteria for eligibility. They are the principal teams that represent the college in football, basketball, lacrosse etc.

They include teams and tournaments that people may be familiar with, such as the National Collegiate Athletic Association’s March Madness tournament.

However, with so much money involved, does this put pressure on college athletes?

“Yes, there is an expectation around performance, there’s no doubt,” says Corran. “But the approach taken in most colleges is to provide the kinds of services and programmes that athletes need in order to support them to perform. This is where colleges in the USA differ from colleges in Europe. There is a holistic approach taken to the student’s experience of college in the States, which includes athletics as well as the academic. Athletics here complement the social and emotional growth of the student, where as in Europe the focus is much more on the academic.”

When he returned to Ireland last year, it was as part of Friendship Four, an initiative set up to promote the relationship between the sister cities of Belfast and Boston.

Corran explains. “Friendship Four started to look at other ways to promote the relationship between Boston and Belfast, and ice hockey seemed to really fit and it was an opportunity to promote the sport also. Our planning of this project began before I retired, but I stayed involved even after I retired to see it through.

“Belfast is now looking to host some international events, like the International Ice Hockey Federation.” The IIHF Ice Hockey world championship Men’s Division Group B is being held in Belfast in April.

Corran is still involved in some consulting work for some university athletics departments, but he says his main plans are to enjoy his retirement.

“We want to go back and see more of Ireland, and I have two sons who are starting their own families now, so I’m looking forward to having time to travel and time with family”.