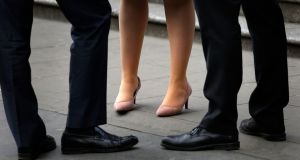 An analysis of the results of a number of recent competitions in the Department of Agriculture, Food and the Marine showed no significant difference in the success rate of male and female candidates. Photograph: Philip Toscano/ PA Wire

Men occupy the majority of senior positions in the Civil Service but they are more likely than women to believe there is gender bias in promotional competitions, a study by the Economic and Social Research Institute (ESRI) has shown.

The research examined gender differences in flexible working, promotions, training and networking, and drew on the responses of 904 civil servants within the Department of Agriculture, Food and the Marine, which has been actively engaged in trying to achieve a better gender balance.

Some respondents signalled this bias was due to the gender balance initiative undertaken by the department, suggesting that women were promoted over men who were more qualified for the job.

An analysis of the results of a number of recent competitions in the department showed there was no significant difference in the success rate of male and female candidates.

“This suggests a misperception among employees of how the gender balance initiative is implemented within the Civil Service,” the study stated.

The report said the use of flexible work options “had a positive effect on perceptions of departmental support for work-life balance”.

On training and promotions, the report also detected a gender bias with women less likely to have participated in training compared with their male counterparts.

Although both sexes felt equally encouraged to apply for positions, women were significantly less likely to have applied for a promotion in the two years prior to the survey.

“There is a widespread view that flexible working damages promotion opportunities,” the report’s author, Helen Russell, said. “Increasing the availability and take-up of such options by men would normalise this practice and may help to reduce the perception that take-up of flexible work options signals reduced work commitment,” she said.

“It may also help dispel the view that actions to promote equality only benefit female workers,” she said.

Separately, An Post says it has reduced its gender pay gap to just 1.4 per cent, while improving female representation across all management and staff groupings.

The group’s second annual gender pay report said the income differential between male and female staff fell from 3.7 per cent to 1.4 per cent in the past 12 months on the back of several initiatives to promote a better gender balance.

A third of the An Post board, which oversees the entire group, are women. The report indicates that An Post’s staff as a whole comprise 74 per cent men and 26 per cent women.

Construction ‘to grow by 15%’ in 2021 despite Covid and Brexit 17:17
Holiday makers urged to book with Irish travel agents 16:56
Hedge fund Elliott pulls out of Hong Kong 16:42
Avolon predicts aviation industry will bounce back faster than anticipated 15:59
Entain shares fall after MGM walks away from takeover bid 15:34