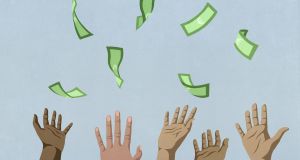 The Green Party proposes a system of UBI in Ireland for all citizens in 2024, pending a successful trial. Photograph: Getty

The concept of a universal basic income has already been suggested for arts workers hit by the pandemic, but what if there was a constant security and safety net for all, a payment always delivered to all citizens with no strings attached?

The idea was first floated by Thomas More in Utopia in 1516, is now being advocated by Pope Francis and President Michael D Higgins and is being considered by governments across the world. The basic income guarantee is frequently referred to as universal basic income (UBI).

UBI is a periodic payment paid at regular intervals as a cash payment without conditions, allowing those who receive it to decide what to spend it on. It is paid individually without a means test and is unconditional – without a requirement to work or demonstrate a willingness to work.

In Ireland, the Green Party fought for a trial run for UBI to be included in the Programme for Government, and there is to be one at some stage over the next five years.

UBI would be given to each recipient from birth or point of residency, from 'cradle to grave', with the amount given to those under 26 years of age varied depending on wages

Among its most ardent supporters is Green Party Dublin Central TD Neasa Hourigan, co-author of the party’s policy. The Green Party proposes a system of UBI in Ireland for all citizens in 2024, pending a successful trial. She envisages that the trial in Ireland will take between 18 and 20 months to plan and that the trial itself would run for two to three years.

“A basic provision of economic resources would address poverty and economic inequality even though it doesn’t promise to eradicate either,” Hourigan says. She says that in Ireland we already recognise payments like these – child benefit and state pension – but UBI would close the gap between the two.

“I am particularly wedded to UBI because it would have the greatest uplift for people on the margins of existing social welfare bands. The lowest income families should already be within the support network but those in part-time employment often find themselves just outside State help. UBI would address that and be particularly important for women and those who care.”

'[UBI is] a big idea but a transformative idea, in the way bringing in an old-age pension would have been seen as radical more than 100 years ago'

The Greens are not alone in supporting UBI. It also has advocates in Fianna Fáil such as Willie O’Dea, while outside government the Social Democrats have also expressed interest. The Department of Social Protection has said that the Low Pay Commission will examine UBI “in due course”.

It has been tested elsewhere. The longest trial run for UBI in the world is in Alaska. Since 1982, the state has been giving every woman, man, and child between $1,000 to $2,000 per year. A 2016 study by the University of Alaska found it reduced poverty up to 20 per cent.

In Finland, a two-year UBI study in 2017 and 2018 saw 2,000 unemployed Finns receive the payments of €560, with no obligation to seek a job and no reduction in payment if they accepted one. Participants reported greater feelings of autonomy, financial security, and confidence in the future, although it did not make them any more likely to find work.

“[UBI is] a big idea but a transformative idea, in the way bringing in an old-age pension would have been seen as radical more than 100 years ago,” says Bobby Lambert, joint co-ordinator of Basic Income Ireland, a campaign group for UBI in Ireland.

Lambert would rather the Irish trial did not focus on a group like the unemployed and rather a more general group of people, preferably a geographical area. To pay every resident in Ireland the basic income would cost an estimated €6.5 billion per annum.

Some taxes suggested to raise for money for UBI in the Green Party policy include pension funds, site value tax, speculative transaction tax and stamp duty for property trades that are not the principal private residence.

UBI is not without its critics. Laura Bambrick, the head of social policy and employment affairs at the Irish Congress of Trade Unions, finds the idea of replacing existing welfare safety nets concerning. The money needed to pay adequate UBI, she says, “would be better spent on reforming social protection systems and building better quality public services”.

“Our welfare system is complex precisely because the root causes of poverty are complex,” Bambrick says. “A one-size-fits-all payment will hurt those with the greatest risk of poverty.”

She believes that no UBI payment would work as well as an average European welfare system for the most vulnerable people. And she contends that providing welfare top-up’s on top of UBI, as advocated by some proponents of this system, would end up being far too costly. “[It] would make for a uniquely Irish UBI, and I look forward to seeing their maths.” Hourigan says that the difference between the current welfare rates and UBI will be made up by further State payments.

Welfare and efficient use of resources also concerns Ian Goldin, Professor of Globalisation and Development at Oxford University, who has spoken against UBI in the past.

He says that if you gave everyone half the minimum wage in Ireland, it would be bigger than the budget of all social welfare. He points out that UBI is favoured by tech billionaires and right-wing libertarians as well as left-wing progressives, and it may be used by the rich to normalise the automation of employment and abolish existing welfare supports.

“It’s giving everyone a low amount of money and we will give unemployed people less than they need and unnecessarily so. That is not the answer to either poverty inequality or the future of work.”

Goldin also takes issue at the universality of UBI, saying it is a waste of needed funds to give the income to the wealthy. He says that societal safety nets and raising the wage of low-paid and vulnerable workers through the current system would be a more worthy use of resources.

'UBI is not going to solve the housing crisis. But it is part of a general investment for a better and fairer society'

The other issue frequently brought up by critics of UBI is the danger that an unconditional payment would disincentivise work, even though the trials done so far suggest that payments have little effect on employment.

Danny McCoy,chief executive of the Irish Business and Employers Confederation (Ibec), says UBI would “undermine our current active labour market policies” which would “result in labour supply challenges and could diminish overall labour cost competitiveness in the economy”.

He says that Ibec remains open to debate on the merits of UBI and research that indicates it could be positive for entrepreneurship. On that point, Lambert highlights a UBI project in Namibia, which found it helped local business as they had the financial security to work on business ideas.

Hourigan says that Covid-19 has changed the discussion and been valuable to the UBI debate. “There has always been a real resistance to the idea that our current tax system and economic models could support such a payment. The Covid-19 crisis has refocused the minds of many towards the well-being of communities.

“UBI is not going to solve the housing crisis,” says Lambert. “But it is part of a general investment for a better and fairer society.”