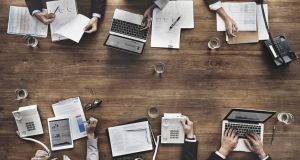 A bad meeting is like a virus. By failing to produce good decisions, it often requires another meeting to be held, then another and another. File photograph: Getty

At the start of every working week, millions of people worldwide prepare for something they do endlessly, joylessly and badly: a meeting.

It was awful before the pandemic, when research showed there were an estimated 55 million business meetings daily in the United States alone. An average manager sat in 12 meetings a week, and even a non-manager racked up eight. It was not much better elsewhere.

I dread to think what the figures look like now that Covid-19 and remote working have ushered in the age of the perpetual meeting.

One exhausted friend I spoke to the other Friday said he had just spent every day that week in back-to-back meetings that started just after 7am and did not finish until close to 5pm.

He does something complicated in the City and manages a far-flung team, so I suppose that is understandable.

But even my meeting count has surged to explosive proportions this year. On Mondays, I could easily spend more than three hours in four meetings even though the only person I manage, more or less, is myself.

None of this would be a problem if all meetings did what they were supposed to do and helped busy people make good decisions about important stuff. Alas, the evidence suggests otherwise.

Studies over the past 15 years have shown anything from 7 per cent to 70 per cent of workers have rated their meetings poor or unproductive, writes US prof Steven Rogelberg in his 2019 book The Surprising Science of Meetings.

Those numbers make me grateful I work for a newspaper. Daily deadlines compel meetings to be short, sharp and productive, which is good considering the cost of those that are not.

The root of the rotten meeting is simple, says Madeleine de Hauke, a meetings coach and teacher whose Antwerp school students did the study.

“We spend our lives in meetings, but there’s very little investment into helping people run them effectively,” she told me last week.

A meetings coach might say that, but I think de Hauke is correct. Running a meeting well takes skill. At a minimum, people need to know in advance why they are meeting, what they are supposed to achieve, who really needs to be there and how they should contribute.

That sounds obvious but it is not, as anyone who has been to a pointless, waffling gabfest knows.

Yet meeting leaders are expected to learn all this on the job. I cannot remember ever being taught how to chair a meeting, which is why it is just as well I have rarely had a job requiring me to do it.

I also like de Hauke’s descriptions of what she calls the “meeting monster”: people who torpedo meetings with an assortment of irksome behaviour. There is the remorselessly off-topic grandstander. The dominating drone. The rude multitasker. The unintelligible rambler. The mute who says nothing but emails later to say what was decided will never work.

The trouble is, we are all meeting monsters sometimes, says de Hauke. A good meeting leader knows how to stop this behaviour, or make sure it never starts by making it clear what will and won’t be tolerated.

I thought the pandemic had made things worse. But de Hauke makes a convincing argument that Zoom calls merely amplify what was going on before.

If a meeting was productive and cheerful before, it is probably better now. If it was wasteful and infuriating, it is likely to be worse.

Still, a bad meeting is like a virus. By failing to produce good decisions, it often requires another meeting to be held, then another and another. Luckily there is no need for a vaccine, just a bit more care and preparation, and an understanding that there is no shame in being taught how to lead a meeting well. – Copyright The Financial Times Limited 2020