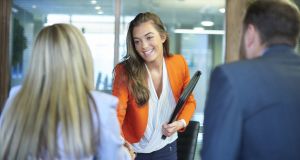 ‘Research and professional experience show it’s harder for women to re-invent themselves and pursue a new career.’ File photograph: Getty

The imminent arrival of a new year often prompts people to think about changing job. But given the disruption of the last nine months coupled with growing pandemic fatigue, wouldn’t a change demand a monumental effort few have the energy for?

“From our research, we know, for example, that 78,000 of our two million Irish members are no more than three skills away from becoming a qualified marketing manager. This is just one example of where the skills gap is quite narrow and filling it would open up a lot more job possibilities,” she says.

Based on recent feedback from business leaders in Ireland, McCooey says there is a willingness to support employees to acquire new skills.

“If ever there was ever a time to ask for training it’s now. Four in 10 leaders we surveyed want to create a learning culture that helps employees develop skills for the future and almost a third of them want to close the skills gaps within their organisations,” she says. “CEOs are also considering how they want their businesses to look post-Covid and this is accelerating the need for training and upskilling.”

LinkedIn has been looking at where the job opportunities are likely to be in 2021 and, based on the number of openings posted globally on its site this year, it has drawn up a list of the 10 roles most in demand worldwide. All of them pay a liveable wage, have shown steady growth over the past four years and require skills that can be learned online.

Topping the list is software developer with a whopping 22.7 million postings. Sales jobs came in next at 17.8 million followed by customer service roles at 4.2 million roles. Also in the mix are project managers (3.9 million postings) and digital marketing experts with 1.6 million.

Closer to home, Ireland’s Labour Market Pulse (produced jointly by IDA Ireland, LinkedIn and Microsoft) is a quarterly update showing the impact of the pandemic on hiring as well as information about labour trends and what jobs continue to be filled.

Technology and business skills across a mix of industries top the table with demand for software engineers/developers significantly ahead of other roles.

So, there are jobs are available – an estimated 150 million in technology alone worldwide over the next five years according to LinkedIn – but that’s cold comfort to those whose skills don’t match.

Recognising this, and that many people may need specific training to transition into an in-demand job, LinkedIn has teamed up with Microsoft Learn and GitHub Learning Lab to provide it.

The training is free and open to anyone (not just LinkedIn members) who wants to reskill. There’s 1,000 hours of learning to choose from and, since the initiative was launched in June, about 45,000 people in Ireland have availed of it. (It can be accessed at opportunity.linkedin.com).

The company has also launched career explorer which is an interactive tool designed to help people find jobs in new areas that match their skills and for those who need help with interview prep there’s also a tool for that.

“We all have more time on our hands at the moment and companies are still hiring. Our stats show someone gets hired around the world every seven seconds, so it’s a good time to take a hard look at how far away you are from the job or career you’d really like to have,” McCooey says.

“What and how many specific skills do you need and what courses or training are available to help you get them?

“We are also encouraging people to tap into their networks and to help each other to find new roles. In our experience companies are using the pandemic as the catalyst to rebuild their businesses. Investing in people is going to be a big part of this in terms of bridging skills gaps, building new ones and creating organisations for the future that are resilient, diverse and inclusive.”

Kieran McKeown, managing director of Irish-owned Matrix Recruitment, says the number of permanent roles on its books has fallen by about 60 per cent this year and that job seekers need to be open to career options not on their radar pre-Covid.

As an example, he points to contract and temporary roles which can offer flexibility, high daily or hourly rates and provide an opportunity to try out another industry without committing to it permanently.

“People who have lost their jobs should look at what transferable skills they have,” he says. “If you have worked in hospitality for example, you are likely to have exceptional customer service and organisational skills, both of which are highly sought after in other industries.”

Mentor Her is an initiative launched by Katie Doyle earlier this year and its aim is help women make successful career moves in 2021 while also closing the gender gap in organisations.

“Research and professional experience show it’s harder for women to re-invent themselves and pursue a new career,” Doyle says. “The corporate world says all the right things but in reality, many organisations are not attracting enough female talent.

“This is not only bad for business, as companies are depriving themselves of access to a diverse talent pool, it’s also bad for women who need a clearer pathway to career success.”