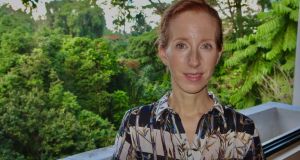 Benita Meagher, executive director of the Irish Chamber of Commerce in Singapore: “There is always an appetite to hire, as Singapore is the hub for southeast Asia with market access to the surrounding growing economies.”

Lawyer Benita Meagher made her way from Athlone to Singapore via Paris, and found a life there as executive director of the Irish Chamber of Commerce.

After completing a law degree in UCD, Meagher started her legal training in Athlone with Hugh J. Campbell.

“He really took me under his wing. His clientele and legal services were very diverse. It wasn’t unusual to have a wealthy developer sitting beside the local drug dealer waiting in reception. Being the only apprentice in the office was ideal to give me the opportunity to learn directly.”

After qualifying as a solicitor in 2005 and taking exams in the law society in the UK, Meagher applied for a visa to work and live in Australia for a year to “spread my wings and explore”.

“I worked as a surf instructor just outside Perth, where I got to surf every day for about three months. Then I sailed up the west coast of Australia.”

After her stint in Australia and subsequent travel across Asia, she returned to Ireland, moving to Cork, where she got a job as a solicitor with O’Donnell Breen Walsh O’Donoghue Solicitors.

But once the recession hit in 2009, Meagher found herself out of work.

“My boyfriend, an engineer with the PM Group, was offered an opportunity to work in Paris. Deciding to join him, I took up lessons at the Alliance Française to immerse myself in ‘la vie en rose’. We also joined the local Irish business association, Network Irlande, and started going to their events.

“This opened up opportunities and I secured a job as legal counsel at Schneider Finance, while also working in a piano bar.”

The couple returned to Ireland after three years and moved to Sligo in 2012.

“It was hard for me to pick up work as a solicitor in Sligo as towns in Ireland were still suffering from the aftershock of the recession.

“We stayed for two winters, where I worked for McEnroe Solicitors and then we went looking to travel abroad again for new opportunities. Singapore was the top of our list. My husband got in touch with his network of engineer colleagues and secured a job offer.”

Meagher, on the other hand, waited until she landed in Singapore in 2014, before getting a role as a legal solutions consultant with multinational mass media and information company, Thomson Reuters Asia.

“It involved a lot of travel around the southeast Asian region. Most expats who work here in Singapore are expected to travel.”

But, after having a baby, Meagher, who had been on the board of the Irish Chamber of Commerce, took on the role of executive director.

“Now I report to the board, who hold senior roles from different industry service sectors here in Singapore. The chamber has just under 300 members and 30 corporate sponsors.”

Pre-Covid-19, Meagher was involved in planning, organising and overseeing events for member and sponsor companies.

“The chamber also offers lectures, workshops and training seminars covering the common needs of our supporters.”

Since Covid-19, she has been working from home.

“As the saying goes, ‘paint the shop when business is slow’ so I am nearly ready to launch a new website and introduce new events, CRM, membership and marketing platform solutions. I am also running webinars, while connecting with other chambers in the region and broadening to an international tribe.

“It’s a massive adventure, every day is different.”

Meagher says living in Singapore is very multicultural, safe and protected. “There is practically no crime and childcare is excellent. There is always an appetite to hire, as Singapore is the hub for southeast Asia with market access to the surrounding growing economies,” she says.

“If you are thinking of coming to Singapore, start reaching out to those you know working here first. Make it known to all your networks in your industry that you are looking to make the move,” she suggests.

But, be prepared for high rents and humidity.

“No-one can prepare you for that. It’s always over 32 degrees and over 80 per cent humid. It’s also very competitive here. An employment pass is tricky to secure. You need to have a skillset that can warrant employment instead of a local.”

She says, you will always be an expat in Singapore; there is no opportunity to become a citizen.

“There is PR, which is permanent residency, which affords you some government benefits but never the same as a citizen. For example, the government has been giving assistance to its citizens financially during this pandemic.”

Like in most of Asia, the lockdown since the coronavirus took hold, has been strict.

“It’s compulsory to wear a mask when you step outside the door, contact tracing apps on phones and temperature monitoring is very common. Everyone is encouraged to report those who don’t abide by the circuit breaker rules. There are a lot of budding photographers.

“For me personally, it has been extremely difficult as my mother passed away in April on the date of my parents’ wedding anniversary. I have been unable to get home since with uncertainties of refusal of entry and quarantine requirements.”

Meagher says her mother’s unexpected death of a brain haemorrhage came as a huge shock as she was fit and healthy.

“I was only able to watch the funeral through a webcast. The grief has been destabilising and once the circuit breaker lifts I will be on the first plane home.”

The Meagher family enjoy a high quality of life in Singapore and had been looking forward to lots of travel across Asia on every day off and holiday. For now, their plans are curtailed.

“But who knows what this post-Covid world will bring – ‘que sera sera, whatever will be will be’.”