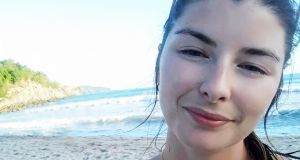 Aoife Monaghan in the British Virgin Islands, where she works as a dentist.

After attending Thornhill College in Derry, the school made famous by the Derry Girls, Aoife Monaghan moved to Glasgow to study dentistry in 2011.

“I had previously spent time in Muscat, Oman, and the Middle East during my school years, where my dad was teaching. Dare I suggest the cliche, but it gave me a taste for living abroad.”

Monaghan chose dentistry as a career because it’s about so much “more than fillings”. “It’s about emotional and physical well being, mental health, self-confidence and potentially saving lives, as it can be the first line of detection for infections and diseases,” she says.

She really enjoyed her time in Glasgow. “It is a vibrant and bustling city and the people are amongst the best I have ever met.”

After finishing five years at university, Monaghan gained a post as a longitudinal dental foundation trainee, working between Glasgow and Edinburgh. “I worked with Alasdair Buchanan’s general dental practice outside Glasgow and the dental hospital in Edinburgh, where I worked in emergency care with a lot of patients who had drug issues and dental problems relating to socioeconomic issues.”

A little later, Monaghan moved back home to Derry to work as an associate at Foyle Dental, a local dental practice. “Coming out of the safety of my training scheme and working solo was somewhat nerve-wracking but I quickly found my rhythm.”

She decided she wanted to branch out and spent 12 months training under Dr Nicola Herron at Rejuvinox Aesthetic, learning how to provide Botox to a diverse range of clients. “I love the precision of this work, everyone has a different muscle pattern, and I enjoy making people feel better about themselves. I reckon when the lockdown ends, Botox will be in high demand.

“I really enjoyed my time back in Derry. So much had changed. It was much more cosmopolitan. When I left, my friends were students, but they had careers when I returned, so we were meeting in restaurants and cocktail bars, rather than student dives.”

But soon the Caribbean came calling. “My boyfriend, who is an architect, moved to the British Virgin Islands (BVI) in May 2018 to help rebuild after Hurricane Irma, which devastated the entire region.”

It didn’t take much convincing for her to join him there. “I was extremely lucky to secure a full-time position with a prestigious dentist in the BVI, Dr Nikki Rubaine-Connell. I met with her on one of my visits and we instantly clicked. It is a small, forward-thinking practice and we are in the process of building a larger surgery to fit our vision.”

Since moving, in 2018, her working day is less stressful than it was back home. “I am totally converted to ‘island time’, where everything takes place at a much slower pace.”

Typically, patients are booked in for an hour, which means that Monaghan can take time with her work and spend time assessing their concerns and making them feel comfortable.

Monaghan lives on the island of Tortola, in Nanny Cay Marina, which is the largest privately owned marina in the Caribbean. “It is a small, highly connected community and quite ‘Irish’ in the sense that everyone looks out for their neighbours and knows each other’s business.”

There is a “larger than expected” Irish diaspora working in tourism, finance and law on the small island, which has a population of just 20,000.

“We all support each other and there’s great camaraderie between the locals and émigrés. There are events on St Patrick’s Day and during the year.”

Monaghan says most activity takes place on the crystal blue Caribbean waters. “I’ve learned how to scuba dive. The BVI has some fabulous dive sites, including the wreck of the Rhone, and it is not unusual to see stingrays, sharks and barracuda on a dive.

“I am also learning how to sail. We often sail in the waters near Necker Island, Richard Branson’s Caribbean home. I’ve seen him in the harbour.

“Life is pretty great here. I’m not going to lie.” But obviously there are pitfalls too, she insists. “Rents are very high – around €2,500 for a two-bed house. It’s also expensive to eat out, so we’re not sitting around eating lobster and drinking white wine every day of the week.”

Monaghan says it also takes time to get a work visa, and it’s a difficult place to get to and from, as it is somewhat off the beaten track. “It normally takes a day to get here and there are numerous stopovers, plus a small plane from Antigua.

“Hurricane season, which starts in September and finishes in November/December, can be pretty intense.”

Anyone thinking of life in paradise should make sure to have a job lined up before they come, she says. “Try to connect with people on the island and get them to show you the ropes, so do visit first and take it from there.”

She says the BVI has managed Covid-19 well. As a small island nation, borders were easily shut down. “They had a strict lockdown and my work was closed. However, they are now slowly opening back up, with my practice seeing emergency patients only.

“Dentistry produces a lot of aerosols during drilling, which may possibly be one of the key routes of transmission for the coronavirus. Therefore dentists worldwide have had to down tools. So I went to Ireland and am planning to return when the border opens to non-resident work permit holders in early July.”

The BVI relies on tourism so the islands will be deeply affected by the lack of travel this year, she says. “There has been a slow recovery since Hurricane Irma in 2017 and I hope they will be able to withstand the additional economic shock of the pandemic.” The islanders are resilient and have an amazing outlook on life, she adds.

“I’m loving the Caribbean. I’m so lucky to be here – a million miles from Derry Girls.”

1 Ryanair to slash 1,000 flights from August and September schedules
2 My aunt never told us that Gran passed away with no will
3 Green Party TD queries ‘usefulness’ of another appeal in €13bn Apple tax case
4 The $6bn judgment pitting Nigeria against Irish businessmen
5 Government to push through €2bn credit guarantee scheme next week
6 If it’s safe to do so, could this be the time to spend for Ireland?
7 Burger King to sell whoppers from cows that belch out less methane
8 McKinsey warned Wirecard a year ago to take ‘immediate action’ on controls
9 Majority of employees don’t want to return to pre-Covid working patterns
10 Costs and borrowing rules locking a generation out of home ownership, builder warns
Real news has value SUBSCRIBE