‘I sometimes wonder if New Yorkers know how to relax’ 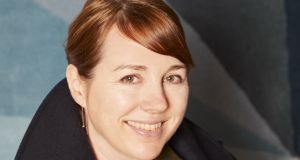 Claire McGovern: The cost of living in New York is notoriously high but you also earn a lot more than you would in other cities.

Working in the creative realm seemed to be an inevitability from the start for Dublin born designer Claire McGovern. “My father was an architect and my mother was a teacher and poet. I used to assist in my father’s architectural office in my late teens to early 20s.”

After studying French and philosophy in Trinity College, she took a sabbatical year in Paris, studying at the Sorbonne and spending the other half in San Francisco.

“I really fell in love with the spirit and sunny nature of northern California, and courted notions to return after college.”

Back on Irish soil, McGovern first completed postgraduate studies in arts administration and art history at UCD, working part time at the former Temple Bar Gallery and Studios and the RHA to gather knowledge and experience of the art world. Then she headed west.

When she left Dublin in 1997 for San Francisco, she got an internship at the De Young Museum in Golden Gate Park and wrote her thesis on the fine arts museums of San Francisco. An assistant’s job to a downtown art adviser followed.

“One thing led to another and I made a fortuitous connection with the CEO of a prominent San Francisco boutique interior design firm where I became an assistant designer and art consultant for the west coast contemporary spa, restaurant and private residential projects.

“Enlisting the help of a few artist friends, I started to custom fabricate and commission the artworks for select spa and restaurant interiors.”

Outside of her designer day job, she also picked up some DJ gigs across the city, doing private parties and weddings and eventually producing parties at Burning Man in the Nevada Desert.

McGovern says her real entrepreneurial days began when she launched her own art and design gallery in San Francisco’s Mission district, which she operated for five years.

“It was an incredible time in my life and we had a lot of fun. I would also go on to work with a few of the major artists creating amazing works in the Black Rock Desert for the annual Burning Man event.”

Through her gallery project, she started to take a real interest in furniture design and began to incorporate her own custom furniture and lighting design into interiors projects around San Francisco and Silicon Valley.

After 10 years in San Francisco, a project with a client in New York City beckoned, and she made the move to the east coast in 2007.

“I worked on creating a series of home furnishing designs in New York, but was delayed by the economic recession of 2008. So for the first year, I collaborated with emerging and experimental Brooklyn-based lighting design manufacturers while spending time back in Ireland.”

During this time at home, she gained inspiration to create contemporary Irish designs. “I really wanted to bring awareness to the incredible level of Irish craftsmanship which is often underrepresented in the international design scene.”

In 2018, McGovern launched Rhyme Studio, a multidisciplinary interiors, design business and consultancy in New York. “The same year, we debuted a collection of rug designs, celebrating Irish wool to serve as a functional floor and wall mounted tapestry. I used Irish wool to create heirloom style designer carpets inspiration from ancient Irish themes. It is popular with American and Canadian interior designers and architects across New York.”

“The collection will soon be available through a Manhattan and London based gallery.

McGovern says Covid-19 has posed intense challenges for her business.

“We were just about to debut 12 new rug designs at an exhibition in NYC in March, until it was cancelled like so many other things.”

Suddenly life went on hold and, rather than commute across the city to her studio, she turned her home into a studio and a classroom for her son.

“But there is always light at the end of the tunnel. Many interior design projects and rug sales were put on hold, but there are signs the market is waking up again. We’ll have to wait and see. New York is, if anything, capable of reinventing itself.”

McGovern says luck played a huge part in her journey. And being offered a Green Card application in 1995 as part of the Morrison programme spared her the torture many Irish people have to face when they want to live and work in the US.

She says anyone thinking of coming over to the US should consider joining local networks including the Irish Network NYC “but ultimately you need to work really hard to succeed in New York”.

The work ethic in NYC is particularly different to the West Coast and other parts of America. I sometimes wonder if New Yorkers know how to relax. It’s a notorious rat race in this city and hugely competitive, although Covid-19 has upended most of the conventions associated with this.”

If you are thinking of moving to the Big Apple, you have to be prepared to work extremely hard and long hours, at least initially until you’ve had a chance to prove yourself, she suggests.

“New Yorkers do not really engage in as much small talk as the Irish. It’s usually a single minded focus . . . on the steps that are best for your career.

“The cost of living is notoriously high but you also earn a lot more than you would in other cities across the States.”

After 22 years in the USA, McGovern says she finds herself more and more “nurturing an incredible longing” for Ireland. “In my experience, you can ‘take the girl out of the country but you never take the country out of the girl’.”