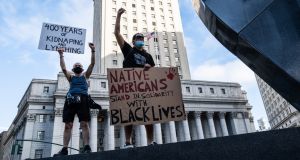 A growing list of US companies across finance, technology, retail and other industries are giving employees Friday off to commemorate Juneteenth. While the holiday has been celebrated by African-American communities in the past, this year it has taken on a special significance as Americans demonstrate against racism and call for an end to inequality.

Juneteenth, a portmanteau of “June” and “nineteenth”, is the annual commemoration of the end of slavery in the US.

It marks the day in 1865 when news of the Emancipation Proclamation - a document issued by Abraham Lincoln during the Civil War declaring that all slaves “are, and henceforward shall be free” - formally reached African-Americans in Texas, two and a half years after it was signed. Some refer to the day as “Jubilee Day,” a nod to the belief that God had not forsaken them and kept a promise of deliverance.

Celebration of Juneteenth migrated with African-Americans travelling north and west out of southern states. It is often commemorated with potlucks and festivals in memory of the family separations suffered during slavery, according to Rhae Lynn Barnes, a professor of American cultural history at Princeton University.

In 1980, Texas was the first state to officially recognise Juneteenth as a state holiday. While it is commemorated by most states it is not a federal holiday.

This week Virginia governor Ralph Northam and New York governor Andrew Cuomo both said workers in their states would have the day off this year. Mr Northam said he would support making Juneteenth an official state holiday, while Mr Cuomo said he would advance legislation to make it do so next year.

Why is it in the spotlight now?

Interest in the holiday was renewed this year as protests against racism and police brutality swept the US following the killing of George Floyd by police. Public anger at racial inequality has put pressure on corporate America to examine its policies on race and other social issues.

The momentum around the holiday has been growing for decades, according to Kelly Navies, an oral historian at the Smithsonian National Museum of African American History and Culture, whose family has celebrated Juneteenth for half a century. “With the pandemic, the uprisings, all Americans are looking toward this holiday, because they are wondering, how did we get to this place?”

It was also in the spotlight after Donald Trump, US president, decided to hold a campaign rally on June 19 in Tulsa, Oklahoma - the site of the 1921 race massacre in which an estimated 300 people were killed and black homes and businesses in the segregated Greenwood District were destroyed.

After receiving pushback, Mr Trump delayed the rally by one day, saying he had done so to honour the requests of “many of my African-American friends and supporters”.

A number of American companies have declared Juneteenth a holiday for the first time. Twitter and Square, both run by Jack Dorsey, were among the first to declare June 19 a company-wide holiday, followed by sporting goods company Nike. US Bancorp and JPMorgan will close their US branches at 1pm local time on Friday.

Department store chain JCPenney and retailer Target have both declared it a holiday and offered employees who do work on Friday extra pay.

Car-booking app Lyft proclaimed Juneteenth an annual holiday, while rival Uber took a slightly different approach. Dara Khosrowshahi declared it a paid day off this year for employees to “stand up against racism”, but said election days around the world will be a company holiday going forward because “lasting change really happens at the ballot box”.

Music streaming group Spotify has also made June 19 a permanent company holiday and said will feature only black artists for one week for its flagship playlist New Music Friday.

Amazon is donating $10m to social justice organisations, but has opted not to give employees the day off. In a memo, chief executive Jeff Bezos encouraged staff to cancel meetings and take advantage of the online learning opportunities the company is providing for its global workforce, including warehouse employees, but it will be up to local managers to determine how and when they can access these materials around their shifts.

The NFL have made Juneteenth a paid holiday for employees - including the Washington Redskins, which has resisted calls to change its name, considered a derogatory term for Native Americans.

Will Juneteenth make a lasting change?

Companies have urged employees to use Juneteenth to celebrate and learn about social issues. But some critics question the authenticity of their commitment and note more tangible things need to be done to advance the causes of equality and inclusion.

Businesses “want to stay on the right side of the customers,” and antiracism protests have made it clear that something must change, said Andrea Roberts, a professor of urban planning at Texas A&M. But “when that happens people seek the low-hanging fruit”, she added.

“You can have legislation that makes you free,” Ms Roberts said. “But until you are dealing with structural racism and anti-blackness in all its forms and facets in society, freedom continues to be an elusive ideal.”

Ms Navies suggested companies begin book clubs that address race and history, which would educate people and start discussions. “A lot of studying needs to take place,” she said.

There is also the fear that Juneteenth could be commodified by corporate sponsorship, the way Pride celebrations have by big brands trying to attract LGBT customers.

Still, Ms Barnes, of Princeton University, said she is hopeful: “The basic thing that abolition, civil rights and now Black Lives Matters is trying to argue is that African-Americans are human beings. What is more human than listening to music, feeding each other and coming together in community?

“Maintaining joy in the struggle is something we have to learn to balance in this country.” – Copyright The Financial Times Limited 2020

1 Why are markets booming when a crash is on the way?
2 How much do Irish people earn? And what will Covid-19 do to our wages?
3 Dunnes Stores trials online ordering from Cornelscourt outlet
4 Could your old car be giving away all your secrets to its new owner?
5 Permission sought for €150m film and media campus in Wicklow
6 Up to 400 jobs saved in Cavan as MML takes stake in CG Power Systems
7 Innovation hubs keen to get show back on the road
8 AIB U-turn on mortgage block for those on Covid wage subsidy
9 Covid-19: Publicans and restaurateurs row over calls for VAT cuts
10 Government committed to finalising roadmap for safe overseas travel ‘shortly’
Real news has value SUBSCRIBE