Courtesy is not a sign of weakness, despite what Silicon Valley thinks 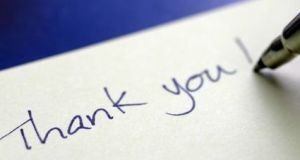 Teaching someone the importance of saying thank you is not just good manners – it is a gift that lasts a lifetime, at work and far beyond.

Last week I got to the office to find something unexpected on my desk: a thank-you note.

It came from a colleague who said he was grateful for a minor bit of advice I had given him that had apparently helped him get through a tricky work situation.

Not that long ago, I would not have thought much about this beyond a) what a thoughtful man and b) what a nice note. Then I came across Ryan Caldbeck, a Silicon Valley chief executive who thinks that saying thank you is far more complicated and can be actively destructive.

His company, CircleUp, invests in very young start-ups and last year he took to Twitter to post an endearing list of blunders he had made when he was a rookie CEO. Number five was a shocker. It was a mistake, he said, to send thank-you emails to people at venture capital firms after meeting them, because it made you look “desperate, not courteous” and suggested your company was, in tech terms, not hot.

I was gobsmacked when I read this, so last week I emailed him to see what he was on about. It turns out he has always been a big fan of sending thoughtful thank-you notes but the habit backfired when he started pitching for venture capital money.

“In tech VC I think many, not all, venture capitalists look at thank-you notes from founders as a negative signal,” he said. “The logic, they would say, is that Mark Zuckerberg and Steve Jobs wouldn’t have sent thank-you notes because they were so busy and because they had so many funding options.” It was unfortunate and unique to the world of VC, “but it exists”.

This confirms a lot of my prejudices about the joyless, hollow depths of Silicon Valley. On reflection though, I can see there might be times when saying thank you can backfire.

One of my FT colleagues was appalled when a jewellery magnate sent her a bunch of flowers after the paper published her interview with him. Another was just as dismayed when a clothing business millionaire sent her a gracious hand-written note thanking her for the article she had written about him.

In both cases, the thankers made the writers fear their articles had been too puffy. It would have been better to have done nothing.

Likewise, job hunters must be careful when sending a thank-you note to an employer after an interview because traps for the unwary abound. It goes without saying that names should not be misspelt nor titles mucked up.

But tone is also vital. A perfectly crafted note that starts with a “Dear So and So” might be fine for a Wall Street bank. I would not try it at a tech company run by a 20-something in sneakers. Nor would I send a thank-you letter to anyone at Goldman Sachs that began with “Dude!”.

In fact, I do not remember ever sending anyone a thank-you note after an interview but that may be because I have never applied for a job in the US.

Surveys there show a large share of hirers expect to get such a note and some will reject any candidate who fails to send one.

I am all in favour of this. Ultimately, the act of saying thank you is a vastly underrated activity.

Anyone who thinks otherwise should read a US study that last year showed people consistently underestimate how much pleasure it brings to the thanked – and overestimate how awkward it makes recipients feel.

Better still, they should talk to a grandmother.

I have lost count of the number of older women I have met over the years who diligently taught their own children to write a thank-you note but never get so much as a text after sending grandchildren birthday or Christmas gifts.

The other week I came across one who was so furious she had gone on strike. She had stopped sending her grandchildren anything at all.

Another was on the verge of confronting her children to say it was time they taught their offspring to be more thoughtful.

Good for her. Teaching someone the importance of saying thank you is not just good manners. It is a gift that lasts a lifetime, at work and far beyond. – Copyright The Financial Times Limited 2019