Job-switching rates on the rise as labour market tightens 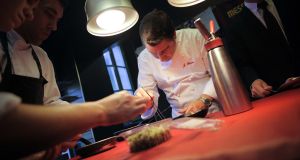 If you fancy yourself as a culinary genius, this might be the time to change career altogether as chefs are currently at the top of the switching league. Photograph: David Ramos/Getty Images

For those who lived through the madness of the last tight labour market, it’s a familiar picture. Wages are going up, bonuses are back, incentive packages are getting sweeter and some companies are paying people sign-up money just to take a job.

The rate at which people change jobs is a strong predictor of future wage growth and there was a lot of it going on in Ireland in 2018. An economic letter from the Central Bank in December, authored by David Staunton and Reamonn Lydon, tells us that switching rates are close to (and in some cases above) the levels last seen in the early 2000s. In a nutshell, this means wage growth will continue to strengthen in the short term.

When job-switching levels are high, wages go up for two key reasons the authors say. The first is  “because one of the main motivations for changing jobs is higher pay (moving up the job ladder)” and “switching job in a tight labour market tends to increase earnings by in excess of 10 per cent”. The second is because employers often have to raise the salaries of non-switchers to retain staff.

“Whilst higher switching relects the increased demand for the skills of switchers, it also has the effect of increasing the bargaining power of non-switchers with the same or similar skills. Hahn et al (2018) shows that this can actually be larger than the direct effect,” the letter says. “In periods of high switching, the wage growth of job stayers contributes more to aggregate wage growth. This is not because their wage growth is higher than that of switchers, but because the majority of workers are stayers.”

The Central Bank says that roughly 3 per cent of employees are switching job here every quarter. Multiplied by four that’s a significant proportion of the workforce and a higher churn rate than would be expected for a country of this size.

And the implications are not just financial. High staff turnover also has an impact on the morale of those left behind while losing people, especially from key roles, is costly and has the potential to destabilise a business.

If you fancy yourself as a culinary genius, this might be the time to change career altogether as chefs are currently at the top of the switching league. There is also a lot of movement within the accommodation and food service sectors in general, with people often moving for quite low increases and small steps up from the minimum wage. The average switching rate in this sector is 3.4 per cent.

Sticking with lower-paid roles, switching rates are also high (2.9 per cent) in the catch-all area of “administration”, where average weekly pay rates are about €570.

Those with higher education are switching more frequently and it comes as no surprise that switching is prevalent among those in information and communications (3 per cent a quarter), science and technology (2.6 per cent) and financial services (2.5 per cent).

The sectors with the highest job-switching rates have also tended to show the highest wage growth in recent quarters. At the other end of the table, public administration and health services have the lowest switching rates at 1.2 and 1.8 per cent respectively.

Economist Pawel Adrjan of the Indeed Hiring Lab, who is also a research fellow at Regent’s Park College at the University of Oxford, says there has been a surge in the uploading of CVs to the Indeed site in Ireland over the last two years and that the majority of those uploading their details are already in employment. This makes them potential switchers and tightens the market as companies are effectively hiring from each other and not from the wider employment pool.

Adrjan says that a low ratio of candidates to positions available in certain sectors is pushing wages up by between 7 and 15 per cent, which is well above current average rises of about 3 per cent. He identifies the hospitality, finance and construction as sectors under pressure to fill vacancies and narrows that down even more to three specific positions: line cook, accountant and quantity surveyor.

At the top end of the executive search market, Mark O’Donnell, a partner with Odgers Berndston, says that while switching was a feature of the market last year with a lot of movement in the early months, there was a slowdown in the last quarter. “Brexit has certainly played a role, with candidates nervous about moving and companies nervous about hiring because things were still so uncertain,” he says.

O’Donnell says the ramifications of Brexit potentially go deep for some organisations and that there is a genuine fear that if Brexit hits profitability, organisations will be looking at restructuring and are holding back on additional senior hires for now.

While the market has softened at the top end, O’Donnell says there are still plenty of opportunities and that remuneration package features such as long-term incentive packages that tie people in for three to five years are back.

In the past, job switching has not remained high for long because workers have come in from outside to plug the gaps. Whether the shortages can be filled in a similar way this time around remains to be seen. As the Central Bank notes in its conclusion “the extent to which increased inward migration can contribute to aggregate labour supply will be important for job-switching patterns in the future”.