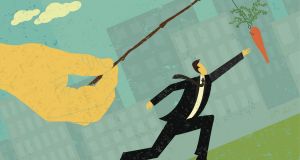 Companies are tailoring the benefits offered to staff on the basis of gender, according to a new survey. Women are more likely than men to be offered flexitime, but less likely to receive the offer of cash benefits, such as employer pension contributions or bonuses.

It found that while 49 per cent of male respondents were offered pension contributions – the most widely offered perk – just 39 per cent of women enjoyed the same benefit.

When it came to flexible working hours, the position was reversed, with 35 per cent of women saying their employers gave them this option. Only 27 per cent of men said the same.

Pension contributions were the perk most sought after by respondents. This was followed by flexible hours and bonus schemes, both of which were sought by 18 per cent of respondents. However, the female respondents were significantly more likely to prioritise flexitime over bonus schemes, with men more interested in bonus schemes.

Desk workers fared considerably better than manual workers when it came to receiving additional benefits at work – most notably on pensions (53 per cent compared with 17 per cent) and bonus schemes, which were four times less likely to be available for manual workers.

“The findings support the widely held contention that women have fewer financial provisions than men,” said Aviva’s Karen Gallagher. “There’s also a very real and obvious gender divide when it comes to employee benefits, with men appearing to seek and receive more financial extras than women.”

A quarter of all employers were reported to offer no benefits over and above wages. Where they do, pension contributions are the most prevalent (45 per cent), ahead of flexitime (30 per cent), bonuses (24 per cent) and subsidised canteens (20 per cent).

Flexitime were considered the most-sought-after benefit by 21 per cent of younger workers, those under 35. This compared with 17 per cent for older workers and 16 per cent of those over the age of 50.