‘We are looking for the softest Brexit possible’

Brexit Proof: In the first of a new series on how business is managing the challenge of Brexit, we talk to Foyle Port CEO Brian McGrath whose business straddles the Border 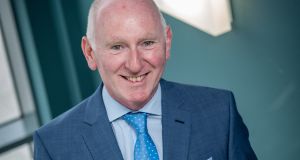 Brian McGrath is chief executive of Foyle Port which directly and indirectly employs more than 1,000 people, and supports the cross-Border, northwest regional economy with a focus on the agri and energy sectors.

I wasn’t overly surprised because it was a question framed by the immigration question in England. It wasn’t something that had any real consideration around the Irish Border or the economy in which we operate.

Degrees on a sliding scale from marginal impact to quite serious impact depending on the type of Brexit we get. After the decision to leave, the Harbour Commission adopted a corporate policy advocating staying in the single market and the customs union. We are looking for the softest Brexit possible because we operate in a cross-Border context.

We are predominantly importing materials here. About 40 per cent of our trade levels come into Northern Ireland which are then exported to the Republic by road. The Brexit outcome will determine whether there is additional bureaucracy around those transactions. The extent to which it will impact our competitive position will determine if future business is at risk. If there was bureaucracy around every single lorry movement, it may be that it becomes uncompetitive and people would look to do their trade elsewhere.

Our Brexit preparations started before the referendum result came out. From the minute the referendum was called, we have been watching and refining our response to it as it has gone along.

There are certain areas where you can make provision and other things you need to address as you are confronted by them. One thing we have uniquely in Britain and Ireland is the capacity to build any additional assets such as warehouses and holding areas that may be required for Brexit but it is not something we would want to have to exploit. Resources could be used better elsewhere but if we have to, we can.

Paradoxically it does because our jurisdiction straddles the Border and we operate in Donegal and in Northern Ireland. Uniquely, it means we can be both a UK and EU port at the same time. We are the only place that can claim to do that. We see that as potentially a big advantage to us if it can be exploited as a European and UK gateway simultaneously.

We are Brexit ready.

A deal is the best. The deal rejected this week at Westminster addressed uncertainty that causes so much concern to our customers. Worst case is a hard Brexit which would cause more uncertainty and immediate problems. A managed exit is what we need.

That is tied up in whether it is a soft or hard Brexit. We feel we have a foot in each camp in terms of what we do and where we operate. We are convinced of the need for good Anglo-Irish relations going forward. Eventually the dust will settle and there will be sensible and strong relations re-established with our Irish stakeholders.

It’s not how a commercial organisation would have gone about it.

We are eternally optimistic, given our location and the market we serve. This has been an unnecessary diversion from what we do. We want security and clarity, and getting on with promoting prosperity for stakeholders in the region in a way that needs a joined-up approach is what we are committed to do.

That is a political judgement. It is hard to see, from a democratic position, how that plays out. There has been enough confusion caused by the process to date. An orderly withdrawal is probably the best we hope for.

Wearing my president of Londonderry Chamber of Commerce hat, I think it is fair to say there is a fairly unanimous view of the members of the need for a soft Brexit. Most wouldn’t object to another referendum but ultimately it is still a question of what happens in England not in the regions. They are not able to influence the outcome on a numeric basis.

We need to have a seamless Border that allows us to do what we do every day on a really integrated basis.