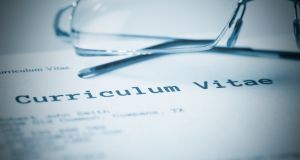 In one instance, it is alleged a Traveller man had his CV amended to conceal his ethnicity. Photograph: iStock

Experts have called for widespread reform of a key Government back-to-work programme for the long-term unemployed, following allegations of bullying, intimidation and threats of sanctions over jobless people.

In one instance, it is alleged a Traveller man who was enrolled on a back to work programme with the service – called JobPath – had his CV amended to conceal his ethnicity.

The criticisms will be aired at the Joint Committee on Employment Affairs and Social Protection, which is hearing expert testimony on the JobPath programme on Thursday.

In an opening statement to the committee, seen by The Irish Times, academics from the Waterford Institute of Technology (WIT) will say JobPath users they interviewed described feeling they were in a system which “actively and capriciously patronised, cajoled, threatened, manipulated and bullied them”.

“Many identified this service as the State deliberately attempting to lower their expectations of work, firstly in terms of their reservation wage, but also interfering in their family and caring responsibilities.”

“A Traveller was enrolled on a course that required reasonable levels of literacy despite having low levels of literacy, and also had his CV amended against his wishes to conceal his ethnicity,” according to the WIT statement.

In interviews with 25 users of the scheme, the WIT academics said they reported they were “forced to undertake futile bureaucratic routines”, experienced “having their CV rewritten or ‘massaged’”, were forced to undertake coaching and training delivered by unqualified and inexperienced trainers, and had been “intimidated over technical or minor infractions of rules”.

One user reported being sanctioned and afterwards how she “was forced to rely on charity and high-interest debt, and experienced food poverty”. The academics also describe how a pregnant woman “was directed, under threat of sanctions, to accept work at a call centre in a location some distance away which had no suitable transport options”.

Another expert, Catherine Greene, who is a guidance counsellor with the Kildare Wicklow Adult Guidance Service, will also give evidence to the committee.

Her opening statement details a case study which she worked on of a 62-year-old man who had left school at 10 and spent 20 years in prison, and “whose only outing was to walk to his mother’s grave in darkness”.

The man was placed in a part-time programme on the advice of Ms Greene. But six weeks later he was called up and removed from his education programme,” according to her opening statement.

“Two weeks later he came to me in an extremely agitated state asking me to make a CV as he had been ordered to return . . . by the end of the week with evidence of 15 job applications submitted.”

She also criticised the design of JobPath, which she said was heavily modelled on the UK, and put in place in Ireland “without making any changes or adaptations for working with the Irish public”.

She said that to be referred JobPath “is to be placed in a very vulnerable position and denied access to further education and training”.

“The forced-march pattern of this recruitment model has been unsuccessful, with only 9 per cent of participants securing longer-term employment.”