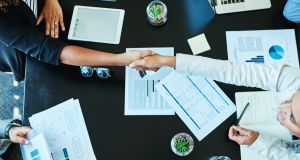 Consider, too, the many employees forced to wait while antitrust regulators scrutinise deals, with only the dreaded merger “synergies” – often shorthand for job losses – to look forward to.

Plenty of ordinary workers deserve sympathy but this week mine is reserved for staff at Refinitiv.

Until October last year, Refinitiv was the trading and data business of Thomson Reuters. The division’s rebrand after last year’s leveraged buyout by Blackstone was celebrated by one over-enthusiastic “Refinitivee” in a rap that included the immortal line: “It’s like a Fintech and a Spaceship got together and mated.”

The coupling has continued. In August, the London Stock Exchange Group agreed to buy the company, but last week Hong Kong Stock Exchanges and Clearing butted in with its own bid for the LSE. Eschewing the fintech/spaceship analogy, HKEX’s chief executive instead likened the possible partnership to a “Romeo and Juliet story” – one which would exclude the Refinitivees.

They are only the latest staff to be stung after bosses crack the merger and acquisition whip. Much M&A still fails. Some 49 per cent of acquirers underperformed between 2016 and 2018, according to Cass Business School’s M&A Research Centre. That is an improvement on the 1990s, but still woeful, and currently getting worse. It is one reason consultants, bankers and academics vie to tell deal-hungry leaders how to join the 51 per cent.

A short new manual by Nuno Fernandes of Iese Business School, counsels boards not to rely on banks for valuations, to avoid “strategic” deals, to deploy the same team for the “before” and “after” of a transaction, to adopt the cold eye of a financial investor, and to “move fast and communicate transparently”. Yet staff uncertainty, Prof Fernandes told me, remains an important obstacle to successful dealmaking.

When the Financial Times was taken over in 2015, we endured just half a day of wild rumours about bids and counterbids, before Nikkei was announced as our new owner. Imagine, then, the anxiety levels of Cadbury staff, who learnt 10 years ago this month about an approach from Kraft that took until the following January to win approval from the UK confectioner’s board.

Consider, too, the many employees forced to wait while antitrust regulators scrutinise deals, with only the dreaded merger “synergies” – often shorthand for job losses – to look forward to.

Scott Moeller of Cass says some staff “check out completely, some gather around the water-cooler, some are spending all the time polishing their CVs and interviewing [for other jobs], and some are so stressed they just call in sick.”

No wonder. Carlos Brito, chief executive of acquisitive AB InBev, once laid out how he assessed senior leaders at Anheuser-Busch after InBev bought the brewer: “In any company, there’s 20 per cent that lead, 70 per cent that follow and 10 per cent that do nothing. So the 10 per cent, of course, you need to get rid of. . . They’re always unhappy anyway and complaining.”

Quantifying the impact of this uncertainty is hard, however. Studies cite one estimate that an average 5.7-hour chunk of productive work in an eight-hour day drops to less than an hour during a change of control.

The source, though, is Dennis Kozlowski, disgraced former chief executive of Tyco, and he told Harvard Business Review in 2000 that the insight was based on “a very interesting statistic I once read”. (He suggested to me in 2015 that the stress - and success - of Tyco’s frenetic dealmaking set him up for his fall, but that is another story.)

Prof Fernandes estimates employees’ attention to their work drops by 60 or 70 per cent as they are assailed by gossip and hearsay during a bid. This could be compounded by “self-centred behaviours, mental and physical illness and lack of motivation” triggered by prolonged bid-related anxiety, according to a 2005 paper. Hence, the imperative for quick and clear communication from the top.

In April 2015, news broke that Shell was in advanced talks to take over BG Group. It was more than a year before staff at BG received confirmation their UK headquarters would close, amid redundancies.

In The Value Killers, the executive in charge of the transition recalls how he announced the bad news to staff in person. “I think people appreciated that at least they knew where they stood,” he says. The merger was “a masterclass in communication”, the book says. Some staff, writing anonymously on the Glassdoor corporate review site, beg to differ: “very unsettling”, said one; “difficult for all involved”, wrote another.

The theory is that the M&A machine advances for the greater good of the whole economy, oiled by cost savings and revenue improvements. I can’t help thinking, though, that if executives devoted more effort to addressing the human uncertainty it also generates, they would soon see an increase in the persistently low proportion of successful deals. – Copyright The Financial Times Limited 2019

‘In Austin, there just seems to be something for everyone here’