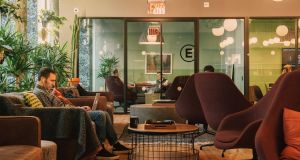 WeWork owner, The We Company, is considering slashing the valuation it will seek in an initial public offering (IPO) at a little over $20 billion (€18 billion), less than half the $47 billion (€42.5 billion) valuation it achieved in a private fundraising round in January, people familiar with the matter said on Thursday.

The We Company’s deliberations illustrate how growing investor scepticism over the office space sharing start-up’s lack of a roadmap to profitability, and its co-founder Adam Neumann’s firm grip on its governance, are weighing on its IPO prospects.

The We Company has not yet launched its IPO road show to formally solicit feedback from investors. It has been expected to do so later in the month.

The We Company rents out workspace to clients under short-term contracts, even though it pays rent for them under long-term leases.

WeWork, which was rebranded We Company earlier this year, is backed by Japan’s SoftBank Group Corp, which has invested or committed to invest $10.65 billion (€9.65 billion) since 2017.