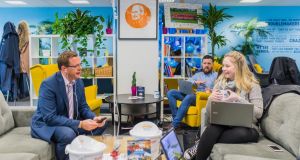 More than 500 companies have used Republic of Work for innovation workshops, accelerators, meetings and events.

The investment is one of a number of deals involving the couple whose business was acquired by Canadian call centre giant Telus International in a deal valued at up to $150 million.

Republic of Work is a 25,500 sq ft innovation campus founded by DC Calahane and Dave Ronanye in April 2017.

More than 500 companies have used the space for innovation workshops, accelerators, meetings and events since it opened.

Mr Kiely said there was no better investment to make in order to help entrepreneurs in Cork and beyond grow.

“What DC and the team at Republic of Work have done to drive forward the Cork entrepreneurial ecosystem is nothing short of excellent. Linda and I are delighted to be able to support the space and hopefully help the next generation of Cork entrepreneurs,” he said.

Voxpro started with six people working above a pub on Marlboro Street in Cork city in 1995. It now employs more than 6,000 people and counts the likes of Google and Airbnb as customers.

Mr Kiely recently stepped down as chief executive of Voxpro after Telus acquired the remaining interest in the business that it didn’t already own. He remains an advisor to the group however.

Among the other investments made by the Kielys in recent years include backing remote working platform Abadoo, legal services start-up Johnson Hana and fashion website Open for Vintage.