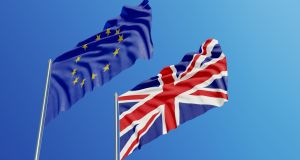 UK government officials were in Dublin this week for a series of meetings with the Department of Finance, the Central Bank and various business groups. Photograph: iStock 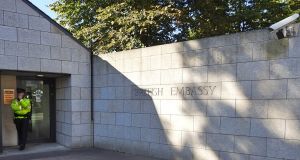 The UK has doubled its embassy staff in Dublin over the past two years in a bid to maintain strong relations after Brexit.

A spokeswoman confirmed that the embassy’s workforce here had increased from 35 to nearly 70 since 2017.

She said the bulk of the additional staff had been deployed across two key departments – trade and bilateral relations.

The move is part of a wider expansion of the UK’s diplomatic mission across Europe, reflecting the fact that it will no longer be at the EU negotiating table.

UK government officials were in Dublin this week for a series of meetings with the Department of Finance, the Central Bank and various business groups.

The visit formed part of the UK’s ongoing and regular dialogue with key economic and bilateral partners, the embassy said.

Central to the discussions was the UK’s future trading relationship with the EU.

Sources said UK officials were keen to stress that Brexit would not result in a more isolationist Britain.

With formal trade talks due to begin in March, negotiators will have less than 10 months to agree a deal before the post-Brexit transition period expires on December 31st.

UK officials are understood to have acknowledged “the challenge” of agreeing a deal in such a short timeframe but to have emphasised that both sides were starting from a point of regulatory alignment.

They have also indicated that the eventual agreement is likely to resemble either the EU’s recent trade deal with Canada or a potentially looser arrangement along the lines of its trade deal with Australia.

Under the “Canada” scenario, nearly 100 per cent of all tariffs on goods traded between both sides would be removed. However, such a deal would be unlikely to remove all regulatory barriers as UK would not be a member of the single market, meaning it products could still be subject to some form of border control, a major issue for trade on the island of Ireland.

The Canadian deal does not cover financial services, which contributed £132 billion (€156 billion) to the UK economy in 2018.

Under the “Australia” scenario, the UK would end up paying tariffs and having quotas imposed on its imports and exports with the EU and some suspect it is code for no deal.

UK officials are also said to have moved to allay concerns that seeking more regulatory control was not about “lowering standards” but about being able to change rules when required.

As part of his Brexit strategy, Mr Johnson has long prioritised being able to strike trade deals with the US, Japan, Australia and New Zealand.

London has already signalled plans to relax trade access to the UK once the transition period is concluded.

On Thursday, it launched a public consultation on whether it should simplify its tariff policy.

Under the revamped rules, the smallest tariffs would be abolished, while others would be rounded down to the nearest 2.5 per cent.

Norwegian airline sued in Dublin by inflight caterer 05:37
Homeworking is depriving me of juicy gossip 05:30
Companies cutting IT investment when they need it most, warns PwC report 05:30
‘I set up an investment club many years ago with a bunch of friends’ 05:20
Tobacco giant’s menthol-ban substitutes take 5% share of Irish market 05:11

1 ‘My rent here is so low it’s a joke’
2 Majority of employees don’t want to return to pre-Covid working patterns
3 Varadkar and Donohoe to meet banks to discuss mortgage breaks
4 Tobacco giant’s menthol-ban substitutes take 5% share of Irish market
5 If tourists are such pariahs should we not be testing them on arrival?
6 ‘I set up an investment club many years ago with a bunch of friends’
7 Goodbody’s planned €155m sale to Bank of China falls through
8 Bank of China confirms deal to take over Goodbody Stockbrokers
9 BrainWaveBank raises €1.2m for its ‘Fitbit for the brain’ technology
10 Paying off your mortgage in full not always the best plan
Real news has value SUBSCRIBE