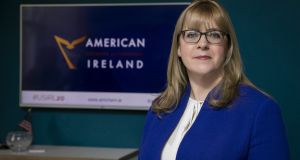 Carin Bryans has served as a director of the American Chamber since March 2016. Photograph: Chris Bellew/Fennell Photography

The chief executive of JP Morgan’s Irish arm has been appointed as president of the American Chamber of Commerce Ireland for 2020.

Ms Bryans oversees JP Morgan’s business in Ireland. She previously held a series of roles at JP Morgan, Chase Manhattan Bank in Ireland and in Zenith Data Systems in France.

1 Why are markets booming when a crash is on the way?
2 How much do Irish people earn? And what will Covid-19 do to our wages?
3 Could your old car be giving away all your secrets to its new owner?
4 Drumcondra credit union collapses as merger plan fails
5 Dunnes Stores trials online ordering from Cornelscourt outlet
6 Digicel warns of Covid-19 hit after first earnings rise in years
7 British pound sinking to ‘emerging market currency’ status
8 Home or car: what’s the best use of my savings?
9 Tetrarch Capital completes deal for Citywest Hotel
10 Permission sought for €150m film and media campus in Wicklow
Real news has value SUBSCRIBE