Zipp Mobility teams up with Luna to launch smarter e-scooters 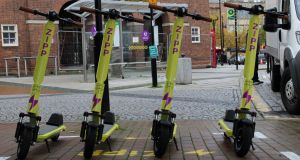 Luna, an Irish start-up that has developed technology to encourage better behaviour by riders and operators of shared micromobility schemes, has teamed up with Zipp Mobility to roll-out smarter electric scooters.

The partnership is one of a number of deals agreed by e-scooter operators for Luna’s ground-breaking technology, which uses artificial intelligence and camera technology to ensure better safety.

The two Irish companies have also agreed to share information it gleans with researchers based in the Insight SFI Research Centre for Data Analytics, as well as with Dublin City Council’s Smart Dublin team.

Zipp, whose backers include former Irish rugby captain Brian O’Driscoll, is to fit its scooters with technology from the DCU Alpha-based company that can detect where exactly the e-scooters are, if they are being ridden properly, and if they have been parked properly after use.

Electronic scooters have exploded in popularity recently, but there have been issues with users riding on both paths and roads and with them dumping scooters at the side of roads or on pavements once they’ve finished with them. To be able to pinpoint where they are to centimetre-level accuracy means that shared scooter operators such as Zipp can tell if a vehicle is parked correctly. It also enables local authorities to ascertain whether rules and policies are being adhered too.

Zipp, which was founded and is led by Charlie Gleeson, operates a fleet of 450 e-scooters in Britain and is planning on launching services locally once legislation is passed allowing them on Irish roads.

It is hoped that Luna’s technology will reduce insurance costs, municipal fines, and fleet management costs for Zipp, while also improving customer satisfaction and public acceptance of shared scooters.

“Zipp is delighted to be partnering with Luna, another rapidly emerging Irish micromobility success story, to make our fleet the most technologically advanced one on the streets of the UK, and in the near future Ireland,” said Mr Gleeson.

“We have seen first-hand the requirement for better GPS capabilities in the industry, in order to better control rogue parking and other operational aspects of our business. Moving from standard GPS accuracy of 5-10 metres, to hyper accuracy at the centimetre-level is a game changer, and we’re excited to be at the forefront of this industry transition,” he added.

The group has over the last year also announced similar partnerships with Swedish micromobility company Voi and with Blue Duck, an e-scooter scheme provider focused on Texas and the southeastern United States.

“Shared scooter schemes will likely be coming to the streets of Dublin, Cork, Belfast and elsewhere on the island during 2021, so it’s important that local authorities leverage the learnings from other locations when implementing their own scooter schemes,” said Andrew Fleury, co-founder and chief executive of Luna.