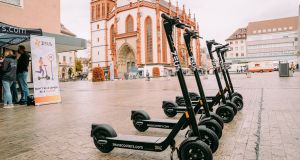 The “smoother ride” of Zeus’s three-wheeled scooters is attracting an older demographic.

The company, which provides unique three-wheeled e-scooters, rather than the usual two-wheeled versions, currently operates shared services in 17 cities in Germany and is eying expansion in other markets.

Founded by former banker Damian Young in 2019, Zeus Scooters launched services in Heidelberg last June, adding another 16 cities since in what is a highly competitive market.

Speaking to The Irish Times, Mr Young said the company is looking at expanding to Spain, Italy, and in Ireland, once legislation has been passed to allow scooters on roads here.

“We wanted to start in Ireland but couldn’t because of the lack of legislation at the time. We decided to opt for Germany because it arguably has the most stringent testing in terms of scooters so I thought that if we could get the go-ahead there it would serve us well in other markets,” he said.

Zeus has its headquarters in Carlow and currently employs 10 people in Ireland and a further 15 in Germany. It intends to double its staff locally this year with additional people being taken on in other markets it enters.

Mr Young claims its three-wheeled scooters have proven to be safer, more stable for riders. As a result, they have been embraced by an older demographic.

“The scooter we have designed has a wider appeal to the market because more of the shock of the road is absorbed and so the ride is smoother. While two-wheel scooters are big with the 18-24 age group, we are attracting a far wider demographic,” he said.

Another differential between Zeus and other e-scooter service operators is that it is heavily community focused with a portion of customer fees going to support local causes.

Mr Menton, who led the new investment, was previously chief executive of Europcar Ireland, selling the franchise back to its French parent for an estimated €26 million in 2017.

“We have been impressed by what this business has achieved in such a short time in a sector that is expected to grow to over €500 billion in a few short years. This investment will allow the business to continue with its ambitious plans and enter new markets including Ireland when legislation is passed. Zeus Scooters is a positive addition to our portfolio in this market,” he said.