Advertising Standards Authority finds ad to be misleading, irresponsible and in poor taste 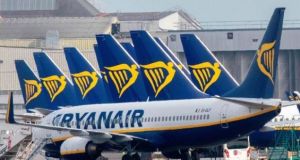 Most of the complaints challenged whether the advertising had the potential to mislead consumers, given there was no guarantee people could travel by Easter.

A Ryanair advertisement which encouraged viewers to book their Easter and summer holiday flights as “vaccines are coming” should not run in its current format again, a draft report by the Advertising Standards Authority for Ireland (ASAI) said.

The advertising watchdog received 59 complaints about the Ryanair ad, which opened with an image of a syringe alongside a bottle containing a label with the word “VACCINE”.

The text “VACCINES ARE COMING” was accompanied by Ryanair’s logo. The ad encouraged viewers to book their Easter and summer holidays with Ryanair, offering one million seats at reduced prices to sunshine destinations including Spain, Italy, Portugal and Greece.

“So vax and go,” the voiceover said, accompanied by images of young adults in their 20s and 30s swimming and having drinks.

Most of the complaints received by the ASAI challenged whether the advertising had the potential to mislead consumers, considering that there was no guarantee that they would be able to travel by Easter 2021, according to the draft report.

The complaints made particular reference to the age group featured as those in their 20s and 30s who are likely to be among the last to receive the Covid-19 vaccines.

Some of the complainants queried whether the advertisement conflicted with public health guidelines regarding travel safety.

Others claimed the ad was “irresponsible, insensitive and offensive and trivialised the effects which the pandemic was having on society and in particular front-line workers.” They also claimed the term “Vax and go” might belittle the roll out of the vaccination process.

Ryanair responded to the complaints by stating that the advertisement was factual and accurate and simply promoted bookings on short haul flights for “Easter” or “Summer” 2021 - not January or February - on the basis that vaccines were coming. The airline said consumers could make bookings to travel in those periods safe in the knowledge that they could change the bookings with no fee applied.

Ryanair advertisers said the ad did not mislead and made no guarantee that consumers would be able to travel. They said there was nothing in the advertisement that would encourage people to disregard public health guidelines.

However, the ASAI upheld complaints that the ad was misleading as it was “likely that consumers would interpret the phrase ‘vax and go’/‘jab and go’ as an unequivocal endorsement of vaccinating and travelling unconditionally.”

“Ireland’s vaccination plan did not support the perception created in the marketing communications of people being capable of being vaccinated if they wished in sufficient time to travel by Easter,” the ASAI’s complaints committee said.

On considering complaints related to public health guidelines, the draft report said the committee found the advertising content had the “potential to exploit the credulity, inexperience or lack of knowledge of consumers and was not prepared with a sufficient sense of responsibility to consumers and to society.” It upheld such complaints.

The draft report said the complaints related to irresponsible advertising were also upheld.

The use of the term “vax and go” / “jab & go” was “not reflective of good taste,” the draft report said.

The committee was of the view that the communication airing during a pandemic, and making reference to it through vaccination, “did not pay sufficient regard for prevailing public sentiment, illnesses suffered, or morality and its tone was inappropriate.”

The draft report stated that action required as a result of these complaints being upheld was that “the advertising should not run in its current format again.”

Under the ASAI code, parties have 21 days to seek a review of a decision, with a fee required to do so.