Micromobility start-up is awaiting legislation on use of electric scooters 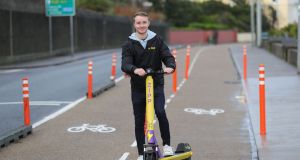 Irish micromobility start-up Zipp Mobility said it will create at least 30 additional jobs in the coming year in Ireland as it prepares to launch e-scooter services throughout the State.

The company is also looking at a Series A funding round for 2021 to fund its expansion.

Founded in 2019 by Charlie Gleeson, the NovaUCD-headquartered company already operates a fleet of 450 e-scooters in Britain.

Once legislation governing the use of electric scooters has been passed in the Republic, the company will look at rolling out services here.

“This last year has been a very successful one for the company and we are currently operating in more UK locations than some of the bigger industry players which is a great achievement for a young Irish start-up such as Zipp,” Mr Gleeson said.

“With new e-scooter legislation set to be passed in Ireland early this year our plan for 2021 includes completing a Series A funding round and launching our service across the country creating at least 30 new jobs in the process.”

Restrictions on public transport during the coronavirus pandemic have led commuters to seek out other forms of transport. However, electric scooters have yet to be officially sanctioned for use on Irish roads, although legislation has been promised for some time.

The micromobility company has four additional launches lined-up for the coming months, including what it said will be the first public shared e-scooter scheme on the island of Ireland.

The company raised €500,000 in an angel investor funding round in September, with former Irish rugby captain Brian O’Driscoll among the investors backing the fledgling company. The money, which brought the company’s total funding to more than €1 million to date, was to be used for the company’s planned launch in the UK.

“Our overall vision for Zipp is ‘mobility done right’ and our aim for the year ahead is to lead the Irish e-scooter-sharing market and expand our operations internationally,” Mr Gleeson said.