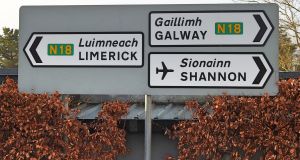 The news came as Cork and Dublin airports backed a Europe-wide call for an easing of EU state aid rules to prevent the industry collapsing as the crisis drags.

Mary Considine, chief executive of Shannon Group, the State company whose businesses include the airport, said Covid-19 had been catastrophic for aviation.

Industry body, Airports Council International Europe (ACI Europe) believes its members, including those in the Republic, could handle up to 64 per cent fewer passengers this year than in 2019.

The organisation has written to EU competition commissioner, Margrethe Vestager, asking that she loosen state aid rules to help prevent the industry collapsing as the crisis drags.

A spokesman for DAA said the company, responsible for Cork and Dublin airports, “fully supported ACI’s calls for more flexible and more effective State aid rules within the European Union”.

The commission eased these regulations last year to support airlines and airports after Covid-19 restrictions grounded much of Europe’s fleet in the spring and slowed recovery afterwards.

Instead the organisation says airports should be allowed to recover costs for as long as restrictions last.

The council also urged the commission to allow member states to subsidise airlines for restarting routes or for launching new ones.

Ms Considine warned that the lifting of restrictions, as soon as it was safe to do so, was crucial to any recovery.

“Also vital is the accelerated and successful rollout of the national vaccination programme,” she stressed.

“The speed at which vaccines can be rolled out nationally and internationally is directly linked to our economic recovery.”

Ryanair has pledged to reopen its Shannon base and fly 14 routes from Shannon this summer, raising hopes that the mid-western airport can begin recovering from the crisis.

During the year, US-UK gene therapy specialist Meiragtx confirmed that it would take two of three factories built by Shannon Group’s property division on a site in its free zone.

US cyber security developer, Exida, also established a base at Shannon, where it plans to create 25 jobs. The property division plans to build two further factories in the free zone.

Visitors to Shannon’s heritage sites, including Bunratty Castle in Co Clare and Malahide Castle in Co Dublin, fell 69 per cent in 2020 to 302,000.

Ms Considine acknowledged that while Covid-19 restrictions cut the numbers of airport passengers and tourists lured last year by Shannon Group, the property arm’s strong performance meant it was not “all bad news”.