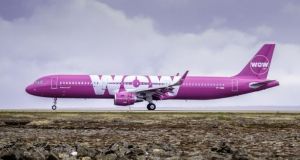 Thousands of Irish consumers’ travel plans in the months ahead have been thrown into disarray after Iceland’s Wow Air ceased operations and cancelled all flights with immediate effect.

The first signs of significant trouble came early on Thursday morning when the airline announced that it was postponing all flights and entering the final stages of an equity raising with a group of investors.

Hours later it issued the statement passengers were dreading: “Wow Air has ceased operation. All Wow Air flights have been cancelled. Passengers are advised to check available flights with other airlines. Some airlines may offer flights at a reduced rate, so-called rescue fares, in light of the circumstances,” the statement said.

It suggested that passengers with travel insurance could claim compensation and assistance and ultimately will be able to claim for compensation in line with European regulation on air passenger rights.

However, if the airline goes a bankrupt then claims have to be filed to the administrator or liquidator and passengers become unsecured creditors and take their place at the end of a very long line of creditors.

Aer Lingus said it would offer so-called “rescue fares”, or discounted tickets, until April 11th to passengers who are due to fly on routes the Irish airline covers, if available. The arrangement falls under an international aviation agreement.

The budget airline, which was founded in 2011, began flying from Ireland to Iceland in 2015, later adding destinations in the US and Canada to its Dublin schedule. It carried 3.5 million passengers last year.

For months it has been fighting for survival and has been in talks with several potential rescuers, including larger rival Icelandair but all attempts at rescue have failed. The airline’s collapse has triggered a cabinet meeting in Iceland although the government has already said it will not use taxpayer money in a rescue.

“Passengers will quite rightly be appalled that Wow Air, was still selling tickets right up to the moment it collapsed knowing full well that any tickets sold would likely not be worth the paper they are printed on,” said Rory Boland, the editor of British consumer group Which?

He said passengers would first need to check if they had booked flights as part of a package and if they had they would have automatic protections.

“If not, you may still be able to claim through your travel insurance or card issuer but it will depend on your circumstances,” he said.

Thomas Duffy booked flights with Wow Air on Wednesday night just hours before the airline announced its collapse and was due to fly to Iceland for a concert on the May bank holiday weekend.

“I booked directly on their website using my Visa,” he said. I called AIB this morning and they advise that to initiate a chargeback they require evidence of the company ceasing business as well as a covering letter, sent by post.

“I was aware of the situation but risked it, paying €200 instead of around €500 with Icelandair,” he says. “I have now booked flights with Icelandair this morning at a cost of almost €600. I had accommodation and tickets for a gig booked and paid for already so I had to go ahead with the break.”

Cillian Moran and some friends were due to fly from Dublin to Keflavic on May 9th and return from there on May 14th. “But we are still awaiting correspondence from Wow Air as we have received nothing from them about the cancellation, but have received emails containing ads over the last few days,” he said.